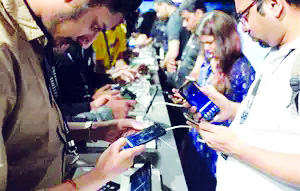 Agencies, New Delhi Indian mobile manufacturing industry is expected to touch Rs 1, 32,000 crore marks by the end of 2018, Information Technology Minister Ravi Shankar Prasad said. Speaking at an award distribution event organised by the industry body ASSOCHAM here on Thursday, Mr Prasad said India manufactured about 110 million mobile phones in 2015-16 as compared to 60 million in 2014-15 showing a growth of over 90%. In value terms India’s mobile manufacturing industry produced mobile phones worth Rs 54,000 crore in FY15-16 compared to Rs 18,900 crore in FY14-15. The same reached Rs 94,000 crore by end of 2017, Mr Prasad said. In terms of volume, in 2014 India produced 5 core mobile phone made locally in India which reached to 15 crore in 2015-16. In 2017 the Indian mobile manufacturing industry produced 22 million mobile phones. ‘The industry would produce 50 million mobile phones by 2020,’ said the minister. In terms of electronics manufacturing units, the minister said within three years, the industry added 120 such units. Two-third of these are mobile manufacturing units and there are 54 such units in Noida alone. On top of that these industries employ 5 lakh people,” he added. Mr Prasad further said that India has the world’s third largest start-up community after US and England. He said that his ministry is working in mission mode to make India’s digital sector $1 trillion economy in next five years and has potential to create 50 lakh to 70 lakh new jobs.