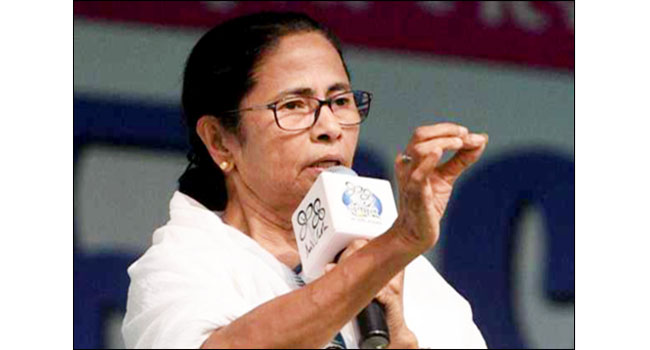 Simulia, West Bengal Chief Minister and Trinamool Congress (TMC) supremo Mamata Banerjee on Thursday commented that though Prime Minister Narendra Modi was coming to Bengal frequently now because of the election, he was visiting "without doing any homework". " He had his facts all wrong and he was misleading the people, " Ms Banerjee alleged. Addressing a public meeting here in Purulia town, the TMC supremo said, " Narendra Modi knows very well that he will be losing, despite spreading out the elections for his convenience and sending 100 per cent central forces. " “Why has he not done this in other states, where he has looted the votes. But even then, the BJP will not win, and that is why he is travelling at his leisure,” she commented. “He is conducting meetings here at the last minute. No problem. But I hear that there was trouble at the Purulia venue today. People were throwing chairs and bottles and the police were attacked as well,” she said. The chief minister alleged, " The media, judiciary and the constitutional bodies have all been encroached upon by this Modi government. Now the central forces are being manipulated as well. " “Gujarat, Maharashtra, Bihar – have central forces been sent there? Then why Bangla? Why have you sent 100 per cent central forces after listening to your state BJP leaders? And then why are your supporters throwing bottles and chairs at the police? Nothing like this is happening at our meetings. It is not the TMC’s culture,” Ms Banerjee remarked. “He came here and claimed I said I want to slap him. I said, I will give him a slap of democracy. He should understand the language first. Why will I want to slap you? I always talk about democracy. So, when I said ‘slap of democracy’ I meant the votes of people. People will democratically slap you through their votes,” the chief minister remarked. “And why should I hit you with stones? I said I will offer you sweets, sweets made of mud and stone chips so that your teeth break and you are unable to make false statements. You are protected by th SPG, why should I try to harm you? I hope that you are alive and healthy for the next 400 years,” Ms Banerjee commented. “The coal mafia and the cooking gas racket are all run by your central ministers and cadres. Should we open the books from Murshidabad? All the truth will come out,” the TMC supremo said. “On the day of Kabi Guru’s birth anniversary, all this is not welcome. Hence we have to remove BJP once and for all, " the chief minister said. " What was the condition of Purulia, Bankura and Medinipur? There was turmoil, there was bloodshed. Now all that has stopped and there is development in every sphere. So many schemes for each segment of society has transformed the condition of the people, " Ms Banerjee said. “We have promoted the Chhou dance of Purulia through the Lok Prasar Shilpi project, which has taken the dance form to faraway places like Paris. We are encouraging traditional folk art and artists,” she said. “I have come several times to Purulia and need not have come today. But why did i? Because we have to get rid of the BJP from Bengal and Purulia’s border. Let them tackle Jharkhand first and then think about anything else. But even there, they will get huge laddoos,” the TMC supremo remarked. “We have committed ourselves to make available the rights of the tribal people and the residents of Junglemahal. We have increased the prices of Kendu leaves, given them land rights and launched several other schemes for their welfare, from education to sports and agricultural marketing,” the chief minister said. " But what has Modi done in the last five years? He will not be able to do even a little toe of what we have done. Getting international awards for schemes like Kanyashree and Utkarsha Bangla were no small achievements, " she remarked. “Modi babu, do your homework, read the reports from Parliament. Under your rule, the country has reached highest levels of unemployment in the last 45 years, whereas Bangla has reduced unemployment by 40 per cent,” Ms Banerjee commented. “We are also the best performers in 100 days work scheme, number one in steel production. And Modi babu, if you want to challenge me on these scores, then challenge. I will accept it then and there. We are number one in MSME, e-tendering and e-governance as well,” the chief minister said. “Now we are setting up an industrial corridor in Purulia, starting from Panagarh and stretching through Raghunathpur. Another power generating centre is coming up in Ayodhya Hills. No one can say progress is not happening here,” the TMC supremo said. “To solve water problems, our PHE department has done a lot of projects, including a Rs 1,200 crore project with JICA of Japan. A major project is well under way in Bankura as well. And Modi babu says nothing has been done. He knows nothing of Bengal, ” she added.