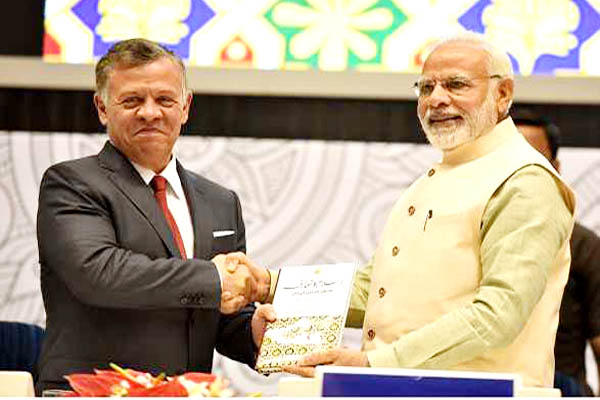 New Delhi, Prime Minister Narendra Modi on Thursday handed over an Urdu translation of the book 'A Thinking Person's Guide to Islam' to the King of Jordan Abdullah II bin Al-Hussein. The book is originally penned by Prince Ghazi bin Muhammad, a cousin of the King. Prince Ghazi is also the Advisor for Religious and Cultural Affairs in Jordan and is known for his scholarship on Islamic matters. The book tries to highlight the crossroads - the Muslims and the world in general is in today. The book highlights that perhaps a "tiny minority" of Muslims seems to be bent on hijacking the religion of Islam and bringing it into perpetual conflict with the rest of the world. The attempts is also to make the world and the non-Muslims in particular understand the real difference between Islam as it has always been, and the 'distorted perversions' of Islam, experts say. The Hindi and Gujarati translations of the book would also be brought out soon, sources said.