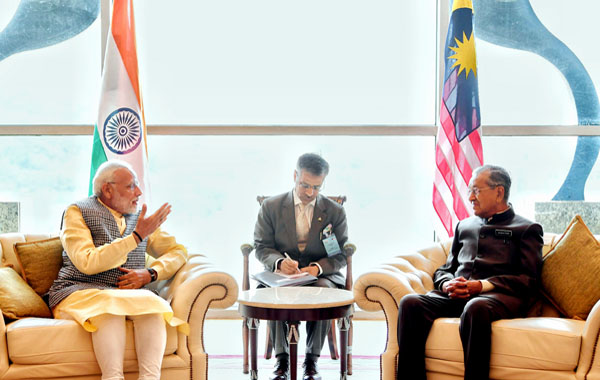 Kuala Lumpur, Prime Minister Narendra Modi on Thursday met his newly elected Malaysian counterpart Mahathir Mohamad and exchanged views on strengthening strategic partnership between the two countries. En route to Singapore, Modi made a brief stopover in the Malaysian capital to personally extend his best wishes and congratulations to Mahathir on winning the general election and appointment as prime minister.This is the first meeting between the two leaders. Modi last visited Malaysia in 2015. Both were in discussion for almost an hour. "The two leaders had a productive exchange of views on strengthening our strategic partnership," Ministry of External Affairs Spokesman Raveesh Kumar wrote in Twitter. Wisma Putra, the the Malaysian Ministry of Foreign Affairs, said that the meeting underlined the fundamental strength of the millennia-old relations between Malaysia and India. It said the visit also demonstrated the strong commitment of the two countries to further strengthen the strategic partnership.India, Malaysia held a military exercise, titled “Harimau Shakti,” in Malaysia from April 30 to May 13. The joint combat exercise was meant to create greater synergy and interoperability between the two armed forces. Malaysia and India enjoy close relations through cultural and historical linkages as well as in various key areas, particularly infrastructure development, education, tourism and defence. India is Malaysia's largest trading partner in South Asia.Modi arrived here this morning and was greeted upon arrival by Mahathir. "I thank him for the warm welcome. We had productive discussions on further cementing India-Malaysia ties," Modi tweeted in English and Bahasa Malaysia. Mahathir in his official Twitter account also posted, "Receiving courtesy visit by Prime Minister of India, His Excellency The Honourable Narendra Modi. Selamat Datang ke Malaysia."