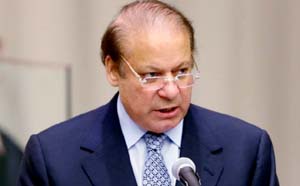 Islamabad, Ousted prime minister Nawaz Sharif is again at the centre of a political storm with the National Accountability Bureau (NAB) launching a fresh inquiry against him over money laundering allegations. According to spokesperson for NAB, the inquiry has been launched on the complaint of Asad Kharal, a journalist/columnist. The journalist has also recorded his statement before the bureau and submitted relevant record to NAB investigators, a report in Pakistan daily Dawn said. According to the spokesperson, the complainant provided details how Mr Sharif and his family members allegedly sent money to foreign countries in an illegal way. Mr Sharif and his family members have been facing similar charges in the references made under the Panama Papers case and being tried in the Accoun­tability Court in Islamabad. The fresh complaint said Khaista Khan and Jamshed Khan, Hawala/Hundi dealers from Peshawar, were engaged by the Sharif family to siphon off large amounts of funds through their bank accounts. According to the testimony, Khaista Khan and Jamshed Khan before NAB, the Sharif family illegally sent funds converted into foreign currencies abroad regularly. The complaint said Khalid Siraj, a first cousin and business partner of Mr Sharif, had disclosed in a statement recorded before the Federal Investigation Agency in the Panama Papers case, the Sharif family’s misdeeds, including transfer of funds aboard and purchase of assets in foreign countries. “Between 1988 and 1991, Rs 56.896 million was sent out of the country,” the complaint said. NAB was informed that in 1988, $758,000 were remitted from the Bank of Oman in Sharjah to the bank’s Lahore branch and then this money was converted into Foreign Exchange Bearer Certificates worth Rs145.06m and was distributed among close relatives of Mr Sharif and partners of his family members. According to the complaint, Mr Siraj said initially Rs140m was transferred to the Bank of Oman in Sharjah from Pakistan through Hawala/Hundi. Later, the amount was credited to the Shamrock Consulting Corporation through the Allied Bank’s London Stock Exchange branch. The amount was used allegedly in the purchase of the Park Lane apartment during 1993-96. According to another allegation, the Ramzan Sugar Mill owned by the Sharif family obtained $30m from Faysal Bank in 1990 during Mr Sharif’s first tenure as prime minister and by misusing his official power. The complainant claimed that secret funds were issued by former finance minister Ishaq Dar through issuing supplementary grants and subsequently the then director general of the Intelligence Bureau, on the instructions of Mr Shairf and Dar, entrusted these funds to Saif-ur-Rehamn for its onward distribution among a foreign firm and individuals to materialise cases against political opponents of Mr Sharif. On the directives of Mr Shairf, Mr Dar and Saif-ur-Rehamn, the civilian spy agency was misused to such an extent that illegal modes of money transfer such as Hawala/Hundi were used to send more than Rs100m abroad after converting it into foreign currency, it alleged. The complaint said the World Bank and the United Nations Office of Drugs and Crime had jointly initiated a report for stolen asset recovery, implicating Mr Sharif vide case no. 147, and found him liable under Article 17 and 23 of the United Nations Convention Against Corruption, of which Pakistan was also signatory.