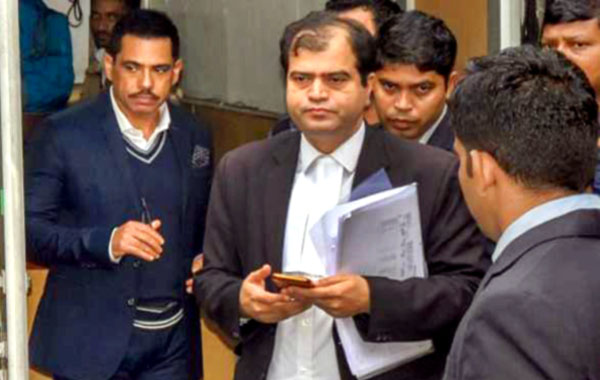 New Delhi, Congress President Rahul Gandhi’s brother-in-law Robert Vadra on Saturday appeared before Enforcement Directorate for the third time in connection with a probe into allegations of money laundering in purchase of foreign assets.Mr Vadra reached probe agency’s office at Jamnagar House around 10:50 hrs. The ED case against Vadra relates to allegations of money laundering in the purchase of a London-based property located at 12, Bryanston Square worth 1.9 million GBP (British pounds), which is allegedly owned by him.He was questioned by the probe agency on February 6 and 7 for several hours. During his last round of questioning on February 7, the investigating team has shown him some property documents and exchange of electronic mail which indicated that he owns the property in London, a reliable source in the agency said on condition of anonymity. However, he denied having any link with the property in question, the source further said.His statement would be recorded under section 50 of Prevention of Money Laundering Act (PMLA) as it was done on last two occasions. Vadra is also expected to depose before the ED on February 12 in Jaipur in an another money-laundering case related to a land scam in Bikaner. The Rajasthan High Court has directed him to cooperate with the agency in the case. He was granted interim bail till February 16 by a Delhi Court.