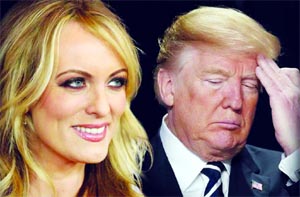 Agencies, Washington US President Donald Trump personally repaid his lawyer the $130,000 that was used to buy an adult film actor’s silence about an alleged affair, his legal aide Rudy Giuliani has said. It appears to contradict Mr Trump, who said he did not know about the payment made by lawyer Michael Cohen to Stormy Daniels ahead of the 2016 election. Mr Trump has denied Ms Daniels’ claims of an affair in 2006.Mr Giuliani said no campaign finance was used, a key issue in the matter. The former New York City mayor, who recently joined Mr Trump’s legal team, told Sean Hannity of Fox News: “They funnelled it through a law firm and the president repaid it.” He said that the repayment was made “over a period of several months”. Mr Giuliani said the transaction was legal and did not represent an illegal contribution to Mr Trump’s election campaign because it was “not campaign money”. He added that the president “didn’t know about the specifics of it, as far as I know, but he did know about the general arrangement that Michael would take care of things like this”. Ms Daniels’ lawyer, Michael Avenatti, said that Americans “should be outraged” at Mr Giuliani’s comments.“We predicted months ago that it would be proven that the American people had been lied to as to the $130k payment and what Mr Trump knew,” he wrote on Twitter. After initially denying the payment, Mr Cohen eventually admitted he had paid the sum privately to Ms Daniels, real name Stephanie Clifford, in October 2016 out of his own funds in exchange for her silence. He has denied that Mr Trump was a party to the transaction. In a statement to the New York Times, Mr Cohen said neither the Trump campaign nor the Trump organisation knew anything about the payment, and he said he had not been repaid. There are two ways to look at Rudy Giuliani’s blockbuster revelation that Donald Trump reimbursed Michael Cohen for his $130,000 payment. The first is that the former New York mayor was freelancing and caught the president and the White House communications team flatfooted. In that case, Mr Giuliani’s brief return to the political spotlight will be short-lived. The other possibility is that this was a pre-planned revelation in the friendly confines of Sean Hannity’s Fox News talk show. Some in the White House may have been caught by surprise, but there was a strategy in play. Perhaps Mr Giuliani and the president decided that the legal exposure from hiding that Mr Trump made the payment was more dangerous than the political risk from admitting he cut the cheque and lied about it. Mr Trump has proven bulletproof when it comes to most political scandals and this one may prove no different, although the Stormy saga has proven to have staying power. Even with the revelation, the president and Mr Cohen’s payment may still constitute a campaign finance law violation.