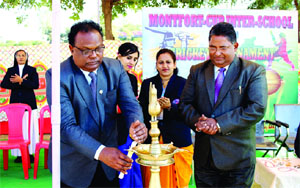 Chronicle Reporter, Bhopal A great initiative by St. Montfort School Patel Nagar Bhopal, towards empowering women and providing a platform for the Girls in the game of Cricket. St.montfort School played host to the Montfort Cup Interschool Girls cricket tournament on 18th Jan 2017-18 in its school premises to promote cricketers among girls in the school. The tournament was inaugurated by the lighting of the lamp by the school principal Rev. Bro. Alex. . The tournament was witnessed by women umpires from Bhopal and Indore. Over 10 Girls team were part of this tournament. In the first match between St. Montfort and St. Theresa, St. Montfort won the toss and chooses to bat first giving them a target of 98 runs. On the first day, match begins with the holes pulling off a decisive victory. St. Theresa did gain the upper hand on a few occasion, but in the end St.Montfort team turned out to be the superior ride ,producing moments of brilliance in all three department and by 27 runs. The Women of the match was Ms. Anshulika Singh of St. Montfort school who scored 39 runs notout and took 2 wicket. In yet another interesting match between Carmel Convent Sr. Sec School Ratanpur and St.Thomas Convent School ,St. thomas girls emerged as the winners by 1 Wicket chasing a target of 70 runs set by Carmel who won the toss and took the bat first. Though carmalites put up a very good performance. But from the beginning was a one sided match and chased the target to over to space. The women of the match was Shreya Tiwari with 11 runs and 1 wickets. Stay tuned for more excitement and tuned a coverage and action from the Montfort Ground. Montfortians marching ahead to the future The journey of a thousand mile begins with a single step. These little steps contribute for creating a better nation. St.Montfort School is all geared up, to celebrate one of the most patriotic national festival of India -26th Jan 2018 Republic day. The school witnessed a spectacular parade show, in the form of a competition for classes I and II on 15th and classes III to XI, on its school ground, on 16th of Jan 2018. Being lead by a commander and a flag holder, the children of various classes marched lined up in 11 files of 3 with 35 students in a single patrol, exhibiting sheer confidence, commitment and team spirit. The parade was adjudged by the school Vice –Principal Rev.Bro.JohnMinj and Miss Asha Singh, Leader trainer, Bharat Scout and Guide. Under the flagship of Rev. Bro.Alex, our school Principal and Vice President of Bhopal District Bharat Scout and Guide, Madhya Pradesh and supervision of our Physical Instructors theprogramme was well coordinated. The Best Parade troupe would be performing on the Republic Day on 26th Jan 2018.The March past Competition conveyed a strong message of marching forward to reach out everyone, rising up and standing strong, to witness our country’s best days ahead of us.