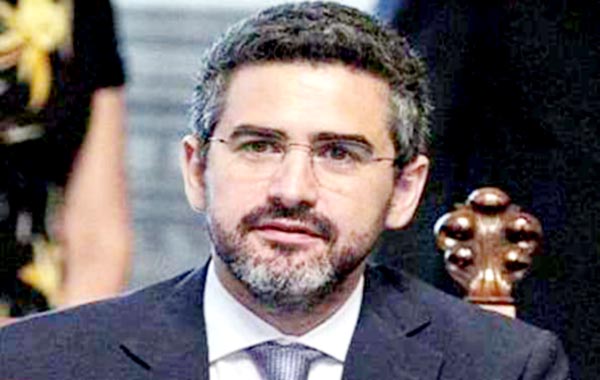 Rome, Italy, 'The representative democracy is perceived not being enough, therefore, we want to have more democracy and bring the direct democracy debate at the centre of the democracy discourse,' said Mr Riccardo Fraccaro, world's first direct minister for democracy. Opening the seventh edition of the Global Forum on Direct Democracy here on Wednesday evening at Palazzo Senatorio in Piazza del Campidoglio, Italy’s direct democracy minister Ricardo Fraccaro said that there was an increasing need for direct democracy as the educated and enlightened citizens had greater expectations from their respective governments. “At the same time, there is a lack of knowledge on the direct democracy concept. Ignorance leads to fear but this has to be dispelled. As regards Italy, the country is moving steadily towards direct democracy, towards more and more democracy. However, we need this everywhere in the world and translate everything into reality,” asserted the first direct democracy minister in the world. The co-president of the Global Forum on Modern Direct Democracy, Bruno Kaufmann, said that there was an urgent need to make the world democracies more democratic. He lamented that the democracies have been reduced to representative democracies only. Mr Joe Mathews, also co-president of the Global Forum on Modern Direct Democracy, said that it was a moment of pride for all democracy lovers that the first direct democracy minister was opening the current edition of the meeting. He said great struggle lies ahead and the world needed more inclusiveness to fructify the concept of direct democracy. Ms Virginia Raggi, mayor of Rome, said the government in the city of Rome has brought changes to its constitution to incorporate the tools of direct democracy and people’s participation was being ensured at several levels. She said, 'There was need to develop the representative democracy into the direct democracy and realise this we need to have more active citizens.' Mr Jin Sung Joon, deputy mayor of Seoul, South Korea, said that it was a great experience in his country to move from autocracy to democracy and now there were ongoing efforts to introduce the tools of direct democracy. Mr Angelo Sturni, city councilor for constitutional reforms in Rome, said that there was a great need to connect local and global movements through internet to promote direct democracy and Rome was pioneering this lately. He added that Rome has introduced online petitions and the right to participation was being ensured. Mr Thomas Benedikter, author of direct democracy books, said that the move of the Italian democracy towards the direct democracy was good but it needed to strengthen its referendum and initiative tools. Mr Mathew Kneale, novelist, said that free speech was important in any functional democracy. He said that inequality was bad for democracy. “Democracy gives power to the people and those propagating democracy must know whom they need to serve,” he added. The Global Forum on Modern Direct Democracy is being sponsored by the city of Rome and organised by the Global Forum consortium in collaboration with civil society organisations. The general and international secretariat of the event is being organised by the Democracy International organisation. The Global Forum -- now in its seventh edition after previous events in Switzerland, Korea, US California, Uruguay, Tunisia and the Basque Country Spain -- has long been based on the practice of sharing and confrontation. In Rome, people have brought their knowledge, scholarships and experiences from their cities, and are sharing them. According to Mr Kaufmann, the 2018 Global Forum will go even beyond the previous editions. “We will not limit ourselves to comparison and learning. On the contrary, we will produce a real new vision regarding what democracy must mean in the city. The city council of Rome has officially asked the Global Forum to produce a new Magna Carta for the democratic cities of the world. And so, through the continuous comparison and contribution of all the participants in the forum, we will gather a document that answers the question about what the cities should do in terms of elections, citizen participation, budget, planning, public space and assistance to citizens, to be considered truly democratic,” he added. “The draft of the Magna Charta produced in Rome will be just a beginning. Since all roads lead to Rome, the streets of Rome lead all over the world. And next year, the Charter for Democratic Cities will travel around the world,” concluded Mr Kaufmann, also a journalist.