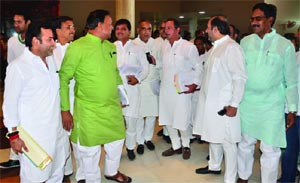 Agencies, Bhopal The Madhya Pradesh Assembly today passed with voice vote – sans discussion – the Appropriation Bill with a spending plan of Rs 2,04,642-cr for the next fiscal beginning April 1, and adjourned the House sine die seven days ahead of schedule, as the standoff between the ruling Bharatiya Janata Party (BJP) and the principal-opposition Congress over the suicide by Public Works Department Minister Rampal Singh’s daughter-in-law continued for the second day. The House also passed the Rs 190.02 cr Third Supplementary Budget, two bills and budgetary demands of departments related to 16 ministers. Earlier, the House saw four adjournments amid uproar by the Opposition seeking a discussion on the admissibility of an adjournment notice over the issue of suicide by Raisen’s Udaipura-resident Preeti Raghuvanshi — who had married the Minister’s son Girjesh at an Arya Samaj Mandir. Preeti allegedly took the extreme step as Girjesh’s kin had got his betrothal done somewhere else. When the House re-assembled for the fifth time, a revised agenda was presented before the House. Speaker Sitasaran Sharma completed the proceedings, as the Congress shouted slogans and created din. Leader of the Opposition Ajay Singh today submitted a no-trust motion against Speaker Sitasaran Sharma to Principal Secretary (Vidhan Sabha) AP Singh. Mr Singh confirmed that the proposal’s receipt but clarified that it was not in accordance to rules. Parliamentary Affairs Minister Narottam Mishra objected to the distribution of copies of no-trust motion to media and described it as a breach of privilege by the Opposition Leader. As soon as the House met for the day, Congress chief whip Raminiwas Rawat sought a discussion on the adjournment notice. Parliamentary Affairs Minister Narottam Mishra said that the issue has lost its rationale as the Minister’s has accepted Preeti as his daughter-in-law. With the Opposition sticking to its demand and paralysing the functioining of the House, Speaker Sitasaran Sharma adjourned the proceedings for 10 minutes. Uproarious scenes continued when the House re-assembled as both treasury and opposition benches traded charges, thus forcing Dr Sharma to adjourn the proceedings again till 1200 hrs leading to an entire washout of the Question Hour. As the House re-assembled, opposition members urged the Speaker to place their viewpoints during the Zero Hour as assured by him. However, Dr Sharma asked them to raise the issue during debate on budgetary demands of the Home Department. Congress members then trooped into the well and raised slogans following which the Speaker adjourned the House till 1300 hrs.When the House re-assembled, Dr Govind Singh (Cong) raised the issue of certain rules being amended that infringed on the rights of members and questioned the need of the House. Dr Sharma said that these rules could be re-considered if members had objection. As heated exchanges continued, the Speaker adjourned the House for the fourth time till 1400 hrs. When the House re-assembled at around 1415 hrs, Mr Mishra, while raising a point of order, said that Leader of the Opposition Ajay Singh had distributed copies of his notice to the Secretariat to media and sought a Breach of Privilege against him. While both members engaged in a war of words over their turn to speak, the House plunged into a din once again as members from both sides created noisy scenes. Opposition members trooped into the well again and shouted slogans. “Women are not safe in Madhya Pradesh. When the Congress comes to power, the party would provide safety to women,” said Mr Singh. A revised agenda was presented and a guillotine was applied – implying that all outstanding budgetary demands from various departments were put to vote at once. Finance Minister Jayant Malaiya moved the Appropriation Bill 2018, and two other bills amid din created by slogan-shouting opposition. The bills were passed by voice vote. With the budget exercise being completed in the Assembly following the passage of the Appropriation Bill, the Speaker adjourned the House sine die on the proposal moved by the Parliamentary Affairs Minister.The Budget Session, which commenced on February 26, was scheduled to complete on March 28.