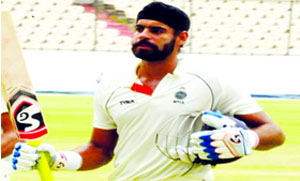 Agencies, Raipur Uttar Pradesh defeated Ranji Champions Vidarbha by six runs in the Central Zone leg of the ongoing Syed Mushtaq Ali T20 Trophy here on Monday. Winning the toss, UP skipper Suresh raina elected to bat first and with the help of opener Shivam Chaudhary’s 49-ball 51 runs followed by Akashdeep Nath’s 31 runs, put 137 runs losing eight wickets in the given 20 overs. For Vidharba, left-arm medium pacer Shrikant Wagh and Ravikumar Thakur emerged with figures of 3-28 and 3-29. In the North Zone leg of the tournament, Punjab registered a 19-run victory over Himachal Pradesh at the Feroz Shah Kotla stadium in New Delhi. Opting to bat first after winning the toss, Punjab put a mammoth 211 runs on board losing four wickets. Opener Manan Vohra smashed a brilliant 74 while his partner Mandeep Singh scored 46 runs.Pankaj Jaiswal, Mayank Dagar and Kanwar Abhinay bagged one wicket each. Chasing the huge total, HP could only manage to reach 192 runs in 20 overs losing five wickets. Opener Prashan Chopra and Nikhil Gangta contributed with decent scores of 52 runs each. Mayank Markande scalped two wickets conceding 35 runs. The Harbhajan Singh-led Punjab side are now at the second position in the points table with three wins from five games while HP are at the fifth spot after two wins from five games. Earlier in a different game, riding on skipper Harpreet Singh’s half century followed by Avesh Khan’s (2-17) brilliant spell, Madhya Pradesh defeated Railways by 24 runs in the central zone leg of the tournament at Raipur. MP, who were put into bat after losing the toss, put 135 runs on board in the alotted 20 overs, courtesy a 47-ball 50 by Harpreet. Down the order, Sohraab Dhaliwal’s contributed with 31 runs. For Railways, medium pacer Amit Mishra ended with figures of 3-17 while Anureet Singh took 2 for 18.Chasing the low total, Railways could only manage to get 111 runs in 20 overs after losing six wickets. Mahesh Rawat was the top scorer with 38 runs. Avesh Khan kept things tight from the start and finished with 2 for 17.This was MP’s third win in five games and are now at the third spot in the points table.