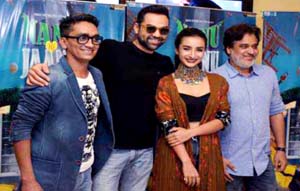 New Delhi, Bollywood actor Abhay Deol who is all set to romance a ghost in his upcoming flick 'Nanu Ki Jaanu', on Monday said he is confident that people will like this horror comic concept as it is a mass film, with a friendly concept. Abhay, who was in the national capital along with his co-star Patralekha, Manu Rishi and director Faraz Haider to promote 'Nanu Ki Jaanu', said,'Nanu Ki jaanu was shot in Delhi, and it’s a great film.' 'I am confident that people will like this horror comic concept. It’s quite a mass film, with a friendly concept. Being a mixture of horror and comedy 'Nanu Ki Jaanu' is really tragic and funny,' he said. Talking about his connection with Delhi, he stated, “Delhi is a second home for me, not personally but yes I have always been here for my work. My most of the movies are shot here. I have many great memories. Delhi people always welcomed me warmly.” The leading lady Patralekha seemed confident about the movie. On asking about her experience, she said,'I chose this film because I am myself portraying ghost. This movie follows a great script, specially a story of a lovable ghost. I really had lot of fun with the entire team while working for this film.' Faraz Haider said, “Yes the concept of the film is supernatural, but the entire film is realistic. You will also find emotional impact in it. Along with horror moreover you will laugh while watching 'Nanu Ki Jaanu'. I am sure people will like this film.” 'Nanu Ki Jaanu' is an upcoming horror comedy flick scheduled to release on April 20. The movie is a remake of 2014 Tamil movie 'Pisaasu'. Featured under the banner of PVR Pictures and Inbox Pictures Pvt Ltd., 'Nanu Ki Jaanu' is written by Manu Rishi and produced by PVR Pictures, Sajid Qureshi. It also stars Brijendra Kala, Manu Rishi, Rajesh Sharma, Himani Shivpuri along with Sapna Choudhary as special appearance for a track.