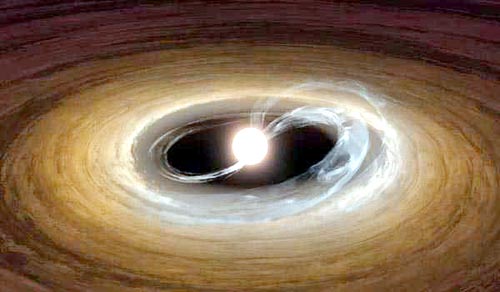 Washington, An adolescent star in the midst of a dramatic growth phase has been observed with the help of two NASA space telescopes. The youngster belongs to a class of stars that gain mass when matter swirling around the star falls onto its surface, NASA said in an official statement on Wednesday. The star belongs to a class of fitful stars known as FU Ori's, named after the original member of the group, FU Orionis (the capital letters represent a naming scheme for variable stars, and Orionis refers to its location in the Orion constellation). The in-falling matter causes the star to appear about 100 times brighter. Typically, these stars, which are less than a few million years old, are hidden behind thick clouds of dust and hard to observe. This new object is only the 25th member of this class found to date and one of only about a dozen caught in the act of an outburst. The new findings shed light on some long-standing mysteries surrounding the evolution of young stars, including how they acquire all of their mass. This rarely observed outbursting behavior could be common but might typically be hidden from our view by thick clouds of dust. The newfound star, called Gaia 17bpi, was first spotted by the European Space Agency's Gaia satellite, but NASA's asteroid-hunting Near-Earth Object Wide-field Infrared Survey Explorer (NEOWISE) satellite serendipitously observed the star's brightening at the same time that Gaia did. Additional searches in NEOWISE's data archives and the archives of NASA's infrared-sensing Spitzer Space Telescope showed that these spacecraft had detected the flare-up in infrared light more than one year earlier.