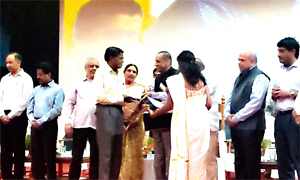 Chronicle Reporter, Bhopal The Biodiversity Management Committee of Satna district has been awarded the National Biodiversity Award. Sri E. Narasimhaman, Governor of Telangana, gave the award on International Biodiversity Day at a ceremony organized at Professor Jaishankar Agricultural University of Hyderabad. The award was received by Committee chief Babulal Dahiya on behalf of the Committee. On this occasion the Minister of Forests of Telangana, Chairman of State Biodiversity Board and biodiversity experts of the country were also present. Community seed bank established: The Pithourabad committee is conserving nearly 125 traditional indigenous varieties of paddy under the guidance of Madhya Pradesh Biodiversity Board for the last 7 years in Uchehara Janpad. Each year, the committee used to cultivate all the traditional species of paddy on small terrains. The Board made it easy to establish a seed bank in a scientific manner. Seed bank now has preserved seeds of paddy, wheat, gram, lentils, maize, kodo, kutki, sanva and many native vegetables. On harvest, the farmer returns one-and-a-half times instead of one, so that new seed remains in seed bank every year. Initiative to link traditional native grains to the market: The committee has preserved the cultivation of traditional indigenous grains and their selected varieties. Farmers take seeds of the indigenous grains from the bank and grow it in their fields. The wheat, paddy, sesame, maize, juar and other grains are sold at high prices in markets of Delhi, Hyderabad, Chennai, Jharkhand and Bangalore. All biodiversity found in gram panchayat area has been registered by the committee by creating a bio-diversity register. The strategy of the committee is to produce three traditional varieties of paddy, Tilsan, Dilbaksa and Kamalshree on a large scale. Preservation of plants, local vegetables and herbs: Committee member Ramlautan Kushwaha is preserving more than 100 plants, vanaspati, herbs and roots in his field. Practically every sapling and herb from Parsamniya plateau is preserved in this garden. Kushwaha is preserving seeds of nearly 40 indigenous vegetables besides supplying its seeds to other farmers. All kinds of bio diversity found in the gram panchayat area have been registered in the register by the bio diversity committee. Beej Mahotsav and Farmers convention are held every year: The Committee organizes Beej Mahotsav and Prakshetra Divas and Farmers Convention every year to make people understand the importance of traditional grains, environment conservation, climate change and biodiversity. These farmers are trained for selection of the best varieties of seeds and in making organic manure, jivamrit manure etc. Farmers should be able to choose seeds according to their fields. For this and exhibition of native seeds is also organised besides providing assistance. Grain and herbs exhibition: Exhibitions have already been organized at Krishi Vigyan Kendras, PUSA Institute, New Delhi, Van Mela, Bhopal, Hyderabad, Ahmedabad, Bangalore, Chitrakut, Rewa etc. Member Secretary Madhya Pradesh State Biodiversity Board Srinivas Murthy said that taking inspiration from Pithourabas committee, the Board had organized the “Beej Bachao-Krishi Bachao Yatra” from May 2017 to July 2017 to collect seeds of traditional varieties from 40 districts of the state.