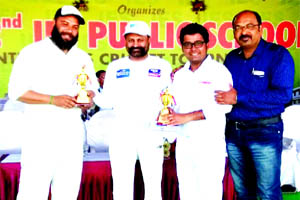 Chronicle Reporter, Bhopal Bhopal Sports Journalist Association organised 22nd IES Public School Inter-Press Cricket Tournament. Match was held between News World and National Sports Time at Old Campion Ground on Friday. National Sports Time won the match by 7 wickets. On Thursday, a cricket match was held between News World and NST. Captain of NST Indrajeet Mourya won the toss and chose to bowl first. News World scored a total of 130 runs in 20 overs with a loss of 6 wickets. Prashant of NST scored 41 runs and Aditya of News World took 3 wickets. In the second innings NST lost two wickets in the initial overs. Then captain Indrajeet Mourya and Jitendra Bagre came and built up the innings. In about 10 overs they pushed up the score to 100 runs. Then Jitendra Bagre played the winnig shot and converted the ball into a four and hence the team won the match by 8 wickets. Man of the match was given to Aditya of NST who took 3 wickets in three overs without any maiden. Rizwan Ahmed Siddiqui, Captain of the News World, and senior cricketer Rajiv Saxena rewarded him. "We have lost matches earlier also but today the mistakes weren’t repeated. The boys played better than last match. Will improve in next matches." -Rizwan Ahmed Siddiqui, Captain, News World "After winning the match, we were confused. Then we opted for bowling. Aditya showed amazing skills while bowling. The opponent team also played well." -Indrajeet Mourya, Captain, NST