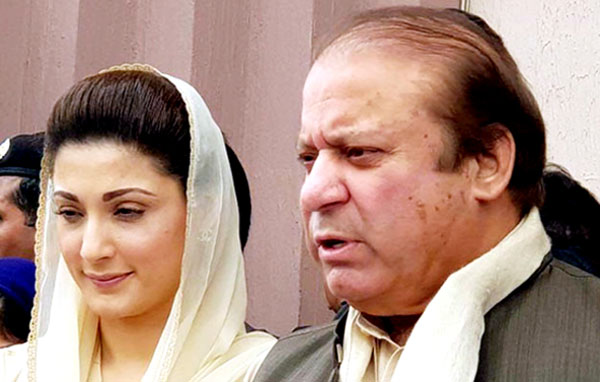 Islamabad, Former Pakistan prime minister Nawaz Sharif and his daughter Maryam Nawaz were arrested after they arrived in Lahore on Friday, a week after being sentenced to prison in the Avenfield properties case. Officials from the National Accountability Bureau (NAB) team took Nawaz and Maryam in their custody from the aircraft, while their passports were confiscated by officials of the Federal Investigation Agency (FIA). Shortly afterwards, the two were boarded on a separate special plane, which took off for Islamabad. Nawaz and Maryam would later be transferred to the Adiala Jail in Rawalpindi, reported The Dawn. According to reports, the former Pakistan premier and his daughter were cooperating with the NAB officials.Earlier, the two arrived in Lahore from Abu Dhabi, after their flight was delayed for over two hours. They had left London a day earlier.Nawaz and Maryam were convicted by an accountability court in the Avenfield corruption reference last Friday and handed jail sentences of 10 years and seven years, respectively. The former was found guilty of owning assets beyond known income, while his daughter was convicted for aiding and abetting her father in covering up a 'conspiracy,' it added.