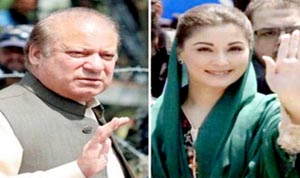 Islamabad, Former Prime Minister of Pakistan Nawaz Sharif and daughter Maryam Nawaz are expected to leave for London on Thursday, according to a Dunya News report on Wednesday. According to the details, Nawaz Sharif and Maryam Nawaz are expected to leave for London from Lahore to visit Nawaz‘s wife Kulsoom Nawaz who is under treatment in London. Earlier, National Accountability Bureau (NAB) wrote letter to Interior Ministry for putting name of Nawaz Sharif, Maryam Nawaz, Hassan Nawaz, Hussain Nawaz and Capt (retd) Safdar’s on Exit Control List (ECL). Expressing concerns of Nawaz family’s departure in order to avoid legal outcomes of references case, NAB renewed his efforts to place their names on the Exit Control List (ECL). NAB - in its letter - stated that Avenfield reference case against the Sharif family has entered its last phase and hence, it is feared that accused may flee abroad in bid to escape legal outcomes. After receiving NAB letter the interior ministry ordered to form a three federal ministers’ committee to review the letter and sent suggestions to federal cabinet. The final decision regarding putting Nawaz family’s names on ECL, will be announced after the federal cabinet receives suggestions of committee. It is worth here to mention that first request of NAB to put Sharif family on ECL was turned down by then interior minister Ahsan Iqbal.