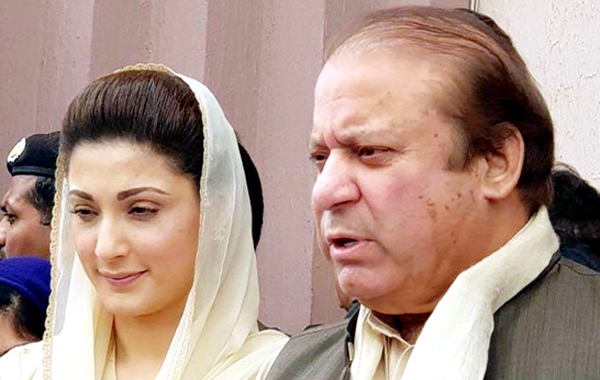 Islamabad, Former Pakistan prime minister Nawaz Sharif, his daughter Maryam Nawaz and son-in-law retired captain Mohammad Safdar were released from Rawalpindi’s Adiala jail on parole hours to attend the funeral of his ailing wife Begum Kulsoom Nawaz, who passed away in a London hospital on Tuesday. All three were released on a 12-hour parole, which is likely to be extended till the burial of Begum Kulsoom at Jati Umra on Friday afternoon, on an order of the Punjab home department and were escorted by police to the Nur Khan airbase from where they were flown to Lahore, Pakistan's national daily Dawn reported. Party sources in Lahore confirmed to the media that Begum Kulsoom would be laid to rest at the Jati Umra residence of the Sharif family. The application was filed by PML-N president Shahbaz Sharif for their release for at least five days. Sources in the government said the Punjab government would extend the parole period till the burial of Begum Kulsoom in Jati Umra, the Lahore residence of the Sharif family. Diagnosed with throat cancer in August last year, Begum Kulsoom was still undergoing treatment when she suffered cardiac arrest on June 15 and was rushed to a private hospital in London where she remained admitted since then. Accor­ding to her family sources, her health deteriorated on Sunday night and she was placed on life support but she couldn’t be revived and breathed her last on Tuesday. Shahbaz Sharif, PML-N president and leader of the opposition in the National Assembly, on Wednesday morning departed for London to attend her funeral prayers at the Regent's Park mosque on Thursday before bringing her body to Lahore. Family sources said Kulsoom's sons would not accompany her body to Lahore though her daughter, Asma, and grandson, Zikriya Sharif, would go with the casket to Pakistan. “A PIA flight carrying the body will arrive here on Friday morning and she is likely to be laid to rest the same day beside the grave of her father-in-law Mian Sharif at Jati Umra,” they said. The PML-N announced suspension of political activities for three days and started funeral preparations at Jati Umra where Nawaz Sharif and Shahbaz Sharif’s mother Begum Shamim Akhtar and their late brother Abbas Sharif’s family reside. While talking to reporters earlier outside the private hospital on Harley Street in London, her son, Hussain Nawaz, said, “My mother died at 11.15am (BST).” He said during the last few weeks she made very good recovery. He said that her recovery not only helped the doctors to remove the ventilator but also allowed her to be shifted to a room. 'But on Sunday night, her health deteriorated suddenly and she had to be put back on the life support machine. However, her condition didn’t improve and she left for her eternal abode today,' he said. Her body was later shifted to the mortuary of Regent’s Park Mosque where, according to the family sources, her funeral prayers will be offered on Thursday after Zuhr. In reply to a question about her funeral, Hussain said that arrangements were being worked out and the details would be released to the media as soon as they were finalised. “It is not a long time since she breathed her last. We are working on the arrangements for her funeral prayers and will inform the media soon,” he reiterated. To condole with her sons, Hussain Nawaz and Hassan Nawaz, on her death, some party workers gathered outside the hospital where various TV channels of Pakistan did live transmissions. Later in the evening, family sources confirmed to the media that Begum Kulsoom Nawaz’s funeral prayers would be offered at the Regent's Park mosque on Thursday after Zuhr and her body would be flown to Lahore by a PIA flight the same evening after completion of legal formalities involving death certificate from the hospital and relevant permission from the coroner allowing the family to take the body out of the UK. Hours after her death, PML-N president Shahbaz Sharif flew from Lahore to Rawalpindi and went straight from Benazir Bhutto International Airport to Adiala jail to meet his brother Nawaz Sharif and niece Maryam Nawaz for condolence. He also discussed with the former premier matters pertaining to shifting of her body and their release on parole for her burial. Kulsoom Nawaz Sharif, 68, died after months in a coma. She was diagnosed with lymphoma last year, barely a month after Nawaz Sharif was removed from office by the Supreme Court, which ordered him to face trial in an anti-corruption court.