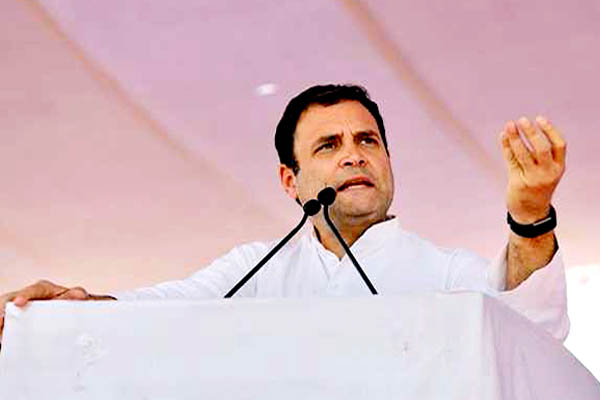 Kalagi, (Kalaburagi ) , Accusing Prime Minister Narendra Modi of taking claim over achievements made by others Congress President Rahul Gandhi on Friday said the BJP led NDA government at the Centre had failed to keep up its assurances made in the 2014 lok sabha polls. Addressing a street corner meeting he said “Mr. Modi habitually lies, his speeches divide communities and spreads hatred. His cadre kill Dalits, minorities and other helpless communities. But, Mr. Modi is silent on them. He keeps boasting about himself and claims credit for the work of others. He insults his political adversaries.” Mr Gandhi said , "PM Modi will never forget to mention Dalits in his public meetings. However, he will remain silent when a Dalit is actually attacked by his partymen." He said though Mr Modi swore by the words of saint philosopher Basavanna, he acted on the contrary and asked the audience whether the Prime Minister had kept his promise on black money, job creation and fighting corruption He said “ Basavanna believed in the ‘Nudidante nade’ principle (practice as you preach). Highlighting the problems of farmers, I requested Mr. Modi for loan waiver. But, he did not even bother to respond. On my request, Mr. Siddaramaiah waived farm loans and released Rs 8,000 crore, as he believed in ‘Nudidante nade’,” he said. Quoting another vachana, “Kalabeda kolabeda” (don’t steal, don’t kill) that urged people to shun vices like uttering lies or flattering oneself, Mr. Gandhi said Mr Modi believed in self aggrandisement. Attacking the Modi government over the rising crimes against women, Rahul said, "Earlier, the government's slogan was 'Beti Bachao Beti Padhao'. Now it is 'Beti Bachao BJP MLAs se' (Save girls from BJP MLAs). Mr Gandhi said "While businesses in India are having a difficult time, the firm owned by the son of BJP President turned Rs. 50,000 into Rs. 80 crore." He said the The BJP-RSS is assaulting Dalits across the nation while PM Modi remains silent and talking about the uplifting the dalit and adivasi people , he said . Mr Gandhi said that No doubt the Prime Minister is a popular man. But Karnataka people will compare the achievements of the state government with those of the Centre. Whatever promises Modiji made, before and after the parliamentary elections, have not been fulfilled. Demonetisation and the new tax regime (goods and services tax) have totally failed, he alleged .