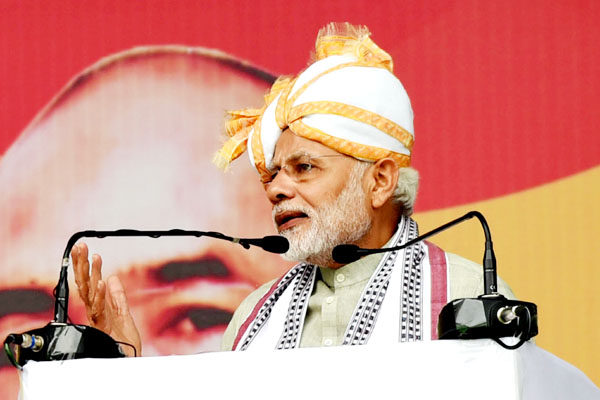 Imphal, Prime Minister Narendra Modi today announced that the north east  is the engine of India’s growth. The nation can’t claim to be developed until the eastern sector is developed he added while addressing a packed Luwangpokpa ground here on Friday. Mr Modi honoured boxing star Mary Kom and inaugurated seven projects on the occasion. He also announced Rs 30,000 cr to develop highways and roads of Manipur. Mr Modi formally inaugurated the National Sports University and other schemes in the ground itself. The sports University will help the people of north east immensely as the region has contributed to the growth of sports, he said.Seven out of eight states of north-east India are connected by rail network. Projects are going on to connect the remaining state capitals, including Imphal, the PM said. The Jiribam railway line in the Manipur Assam border will have broad gauge connectivity.The tallest bridge, a long tunnel will also be constructed by Railways in Jiribam, Imphal line, he said. About Rs 5300 cr was sanctioned annually for development in railway project in north east and to improve connectivity in the country an additional 460 km was declared as national highway, the Prime Minister said. He also announced establishment of ten Indian Reserve Battalions (IRB) in the north east including two for Manipur. It will help in providing jobs he added . Mr Modi further said, Chief Minister N Biren has done a great job within one year in office and as the government enters second year today it has shown what is governance, how centre state relations are maintained. The PM said he had promised in February last year that what Congress could not do in 15 years, BJP government will do in 15 months. It has been fulfilled and the BJP government is a government which performs. The government has removed negativity removed, law and order improved, corruption eradicated, transparency and infrastructure ensured.