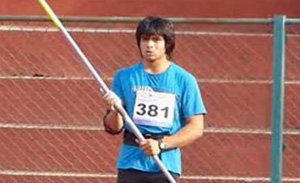 New Delhi, India's javelin-thrower Neeraj Chopra clinched gold at the Sotteville Athletics meet in France on Tuesday. Chopra's throw with a distance of 85.17 m was enough to surpass Moldova's Andrian Mardare who had a throw of 81.48m distance. Andrian Mardare was 2012 Olympic champion from Trinidad & Tobago, Keshor Walcott, and his best throw was 78.26 m. Chopra, the 20-year-old first made heads roll when he set a juniorworld record in 2016. He won gold at the World Under-20 Athletics Championship with a throw of 86.48m. Chopra's next big test will be at the Asian Games next month in Indonesia.