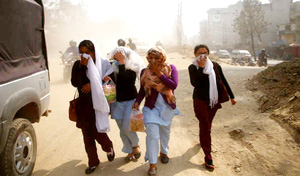 Kathmandu,[/caption] As many as 35,000 people lose their lives due to air pollution in Nepal every year, a report in The Himalayan Times has said. This data was made public at a seminar organised by Nepal Academy of Science and Technology (NAST) on Friday.It was informed at the seminar ‘Air Pollution Control’ that there are various factors contributing to air pollution, which has become a major cause behind increasing number of deaths in the country. Province 1 Governor Govinda Bahadur Tumbahang underscored the need to address the all-pervasive problem of air pollution, giving it high importance than the regional, ethnic, religious and political issues. NAST Vice-Chancellor Prof Dr Jeevraj Pokharel shared that they are setting up pollution measurement centre in each province for the control of air pollution. Likewise, Purbanchal University Vice-Chancellor Prof Dr Ghanashyamlal Das and Biratnagar Metropolis Mayor Bhim Parajuli said that the menace triggered by air pollution is on a rise due to carelessness on part of people. Presenting a working paper, NAST Academician Madan Lal Shrestha informed that globally air pollution is the cause behind lung cancer (36 percent), heart attack (34 percent) and other cardiac diseases (27 per cent). Meanwhile, Nobel Teaching Hospital, Biratnagar has provided free health treatment worth Rs 45.47 million.As many as 764 patients from low economic background were provided free health treatment, equivalent to the above amount, during the past ten months, said Hospital’s Director Dr Rajesh Nepal. The service was provided under Disadvantaged Citizens Treatment Fund, he further shared.