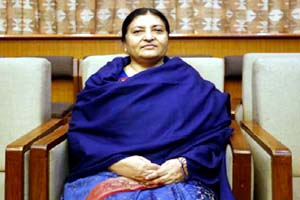 Kathmandu, In Nepal, incumbent President Bidya Devi Bhandari has been re-elected as the head of state for the second time, securing nearly three-fourths of the total vote strength of the Electoral College, a report in The Kathmandu Post said on Wednesday. Elected as the first woman president of the country in 2015, she had presented her candidacy for the second time with the backing of the left alliance — CPN-UML and CPN (Maoist Centre) — which holds a comfortable majority in the Federal Parliament and provincial assemblies. President Bhandari garnered over 74 percent of the votes to be re-elected. Her rival Nepali Congress’s Kumari Laxmi Rai hardly drew 25 percent of the votes.Out of 52,501 votes by weightage President Bhandari secured 39,275 votes while Rai got 11,730 votes.The Electoral College comprising the members of Federal Parliament and provincial assemblies voted in the presidential election. Nabaraj Dhakal, spokesperson at the Election Commission, said out of 884 members of the Electoral College 879 were eligible voters. But only 862 participated in the election. The vote weightage of a member of federal parliament comprising House of Representatives and National Assembly is 79 while it is 48 for the provincial assembly members. Three nominated members to the National Assembly could not vote as their case is sub-judice at the Supreme Court while House of Representatives member Resham Chaudhary, who is in police custody in connection to the 2015 Tikapur carnage, was deemed ineligible to vote. Provincial Assembly member Rajib Gurung aka Deepak Manage, who is on the run after he was convicted in an attempted murder case, was also disqualified for voting. Besides the electors from the UML and the Maoist Centre, those from Sanghiya Samajbadi Forum-Nepal, Rastriya Janata Party-Nepal, Rastriya Janamorcha and Rastriya Prajatantra Party also voted for President Bhandari to re-elect her for the second full term.The electors from Sajha Bibeksheel, Naya Shakti and Nepal Majdoor Kisan Party did not cast their votes. President Bhandari is expected to take the oath of office on Wednesday at 4 pm. She was first elected the head of state in October 2015. Prior to her election, she was the vice-chairman of UML, the post to which she was elected twice in 2009 and 2014. She is the wife of late UML leader Madan Bhandari who propounded the principle of “Janatako Bahudaliya Janwad” (people’s multi-party rule), which is still the guiding principle of the UML. President Bhandari, who was involved in politics from her college days, rose to prominence following the death of her husband in a jeep accident in Dasdhunga, Chitwan, in 1993. She won the by-election from Kathmandu-1 defeating the former Prime Minister Krishna Prasad Bhattarai of Nepali Congress. She also won two others elections from Kathmandu-2 in 1994 and 1999. Previously, President Bhandari had led the Ministry for Environment and Population and in 2009 the Ministry of Defence.She also led the UML’s sister wing All Nepal Women Association for around two decades. During her previous tenure as the President, she had had a fair performance, save the controversy over delaying the ordinance of the National Assembly and not approving the nominees to the NA recommended by the erstwhile Sher Bahadur Deuba led government. Constitutional expert Bipin Adhikari said: “She was dragged into controversy because she was seen as favouring one party over another when it came to approving the National Assembly nominees, but we must also bear in mind that she had stalled the nominations made by a caretaker government.”He said that the head of state must keep up with the spirit of statute and always strive towards uniting the country and her people.