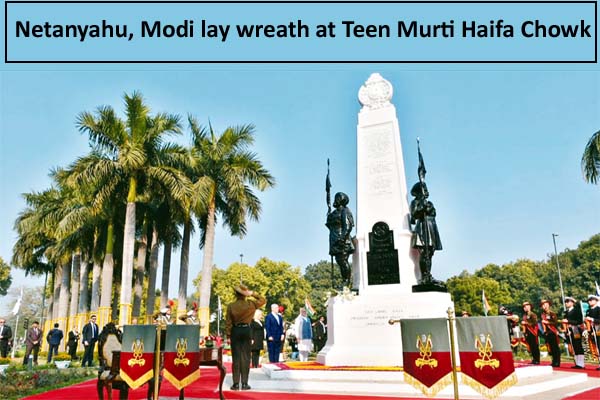 Agencies, New Delhi Israel Prime Minister Benjamin Netanyahu and his Indian counterpart Narendra Modi paid tributes to the martyred soldiers at the Teen Murti Haifa Chowk. Immediately after his arrival here for a six-day visit to India, Mr Netanyahu, his wife Sara and Prime Minister Modi drove to the Teen Murti Chowk to lay wreath at the Chowk. Minister of State for External Affairs Gen (retd) VK Singh was also present to receive the visiting dignitary along with Mr Modi.The Teen Murti Chowk has been renamed after the Israel city of Haifa, as a mark of tribute to the history of India-Israel relations. The three bronze statues at Teen Murti represent the Hyderabad, Jodhpur and Mysore Lancers, who were part of the 15 Imperial Service Cavalry Brigade, which carried out the victorious assault on the fortified city of Haifa on September 23, 1918, during World War I. Israeli Prime Minister also wrote on the visitor’s book at the Chowk. Mr Modi also signed the visitor’s book.External Affairs Minister Sushma Swaraj will call on Mr Netanyahu later in the day.