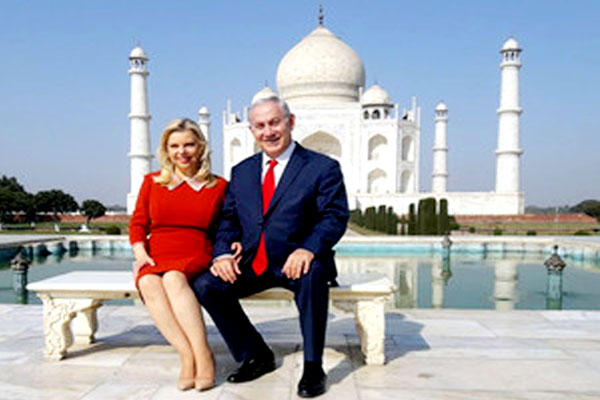 New Delhi,[/caption] Israel Prime Minister Benjamin Netanyahu and his wife Sara will visit Agra on Tuesday to enjoy the aesthetic beauty of the Mughal-era monument of love.According to sources, the visiting dignitaries are likely to be received at the Agra airbase at Kheria by the Uttar Pradesh Chief Minister Yogi Adityanath. After the visit of the 17th century ivory-white marble mausoleum on the south bank of the Yamuna river, the Israel Prime Minister will return to Delhi and later in the evening inaugurate the third edition of the geo-political annual conference - Raisina dialogue. Prime Minister Narendra Modi and External Affairs Minister Sushma Swaraj will also be a part of the inaugural session of the three-day event. Among the impressive line up of more than 150 speakers for the three-day event, also include former Afghanistan President Hamid Karzai, former Prime Minister of Canada Stephen Harper and former Prime Minister of Sweden Carl Bildt. Army chief General Bipin Rawat and Navy chief Admiral Sunil Lanba will also address a session besides Admiral Harry Harris, Commander, US Pacific Command, General Chris Deverell, Joint Forces Commander, UK, among others. The event is being jointly organised by the External Affairs Ministry and Observer Research Foundation (ORF). The theme of the dialogue this year is 'Managing Disruptive Transitions: Ideas, Institutions and Idioms.'