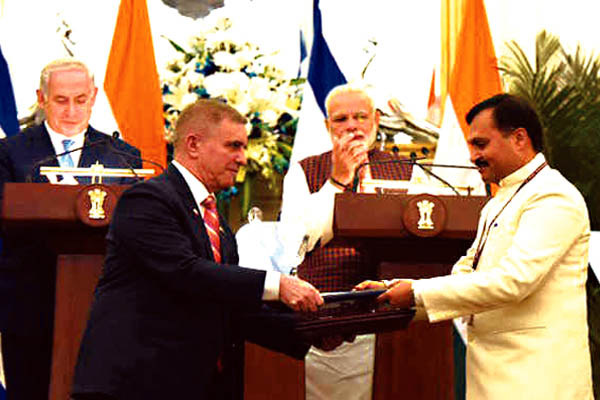 Agencies, New Delhi In a big push to their bilateral ties, India and Israel on Monday held wide-ranging discussions, resulting in inking of nine MoUs, focussing on defence, agriculture and cyber security. On the second day of Israeli Prime Minister Nenjamin Netanyahu’s visit to India, the two sides held wide-ranging delegation level talks here. The Indian side was led by Prime Minister Narendra Modi along with senior ministers and top Ministry of External Affairs officials. While in his statement Mr Modi said he shares impatience of his Israeli counterpart to achieve results, Mr Netanyahu , in turn described Mr Modi as a revolutionary leader. In a series of tweets, Mr Modi said he would have a chance to be with Israeli PM in his home state Gujarat day after. ‘There, we will have another opportunity to see the fulfillment of the promise, which our mutual cooperation holds in diverse areas such as agriculture, technology, and innovation,’ he tweeted. ‘In Prime Minister Netanyahu , I have a counterpart who is equally committed to taking the India-Israel relationship to soaring new heights,’ Mr Modi said in his tweet. ‘We are committed to facilitating the flow of people & ideas between our geographies.It requires policy facilitation, infrastructure & connectivity links & fostering constituencies of support beyond Government. In defence, I have invited Israeli companies to take advantage of the liberalised FDI regime to make more in India with our companies. We are venturing into less explored areas of cooperation such as oil & gas, cyber security, films and start-ups,’ Mr Modi said. We will strengthen the existing pillars of cooperation in areas that touch the lives of our peoples. These are agriculture, science and technology and security. We exchanged views on scaling up the Centers of Excellence that have been a main-stay of agricultural cooperation. We have imparted our shared impatience to the implementation of our earlier decisions. The results are already visible on the ground. Our discussions today were marked by convergence to accelerate our engagement and to scale up our partnership,’ Mr Modi said.