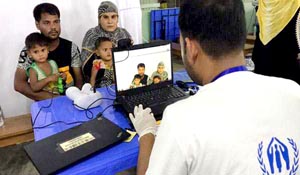 United Nations, Rohingya refugees sheltering in Bangladesh will soon have credit card-sized plastic IDs – many possessing, for the first time ever, an individual identity document – providing another level of protection, according to the United Nations refugee agency.The exercise, which began at the end of June, is expected to take up to six months to complete. It “will help consolidate a unified database for the purposes of protection, identity management, documentation, provision of assistance, population statistics and ultimately solutions for an estimated 900,000 refugees who have fled from Myanmar to Bangladesh in successive waves of forced displacement,” Charlie Yaxley, spokesperson for the Office of the UN High Commissioner for Refugees (UNHCR) told reporters on Friday in Geneva. Since August of last year, more than 720,000 have fled in what was one of the world’s largest and fastest growing refugee emergencies in decades. “The verification will play a key role in establishing refugees’ identities and their declared places of origin in Myanmar,” he continued. “It will help preserve their right to voluntarily return home, if and when they decide that the conditions are right to do so.” The exercise will also help to boost accurate refugee data – supporting the Government and humanitarian partners to better understand their specific needs; plan, target and deliver protection and assistance; and avoid duplicating services. “Biometric data, including iris scans and fingerprints as well as photographs, are used in the exercise to confirm individual identities for all refugees over the age of 12,” Mr Yaxley explained. The credit card-sized plastic IDs, issued jointly by the Bangladesh Government and UNHCR, contain a number of anti-fraud features. Since the start of exercise on 21 June, some 4,200 refugees have been verified – despite heavy monsoon rains in recent days – most attending their verification appointments, aware of the significance of having an identity card. In addition to providing laptops, servers, wireless routers, biometric hardware and printing equipment, UNHCR is also making available special biometric registration software. “Following his visit to Bangladesh this week, the UN High Commissioner for Refugees, Filippo Grandi, said greater resources must be found to develop education, healthcare and infrastructure to build a more sustainable life for Rohingya refugees and their hosts,” said the spokesperson. Ten months into the Rohingya refugee crisis, the response continues to remain focused on addressing the massive humanitarian needs, and on mitigating the impact of monsoon rains in refugee settlements. To date, the UN’s Joint Response Plan for the Rohingya refugee situation in Bangladesh is only 26 per cent funded. “Additional international support is needed to step up the assistance from purely humanitarian and day-to-day support towards medium-term and developmental assistance” said Mr. Yaxley, echoing the High Commissioner’s message.