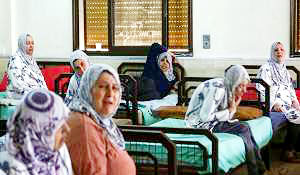 Ankara, March 2018 marks seven years of the conflict in Syria -- the conflict that has forced millions of people from their homes, schools and jobs. The conflict has left many injured or disabled, taking their loved ones or destroyed their hope for a peaceful future. Millions of Syrian people have had to flee, trying to find refuge. The escape, long and dangerous, often leads refugees to countries with unfamiliar languages and cultures. More than 3.5-million Syrians have arrived in Turkey, making it the country with the highest number of refugees in the world. The leaders and the people of Turkey have opened their communities, homes and services to the newcomers, but Syrian refugees still face the daunting prospect of starting a new life in a foreign land, a WHO release on Friday said. The stories below are those of Syrian refugees in Turkey. Some were doctors, nurses and midwives in their homeland. Now, they have the opportunity to start afresh in Turkey, helping their fellow refugees, while practicing their professions. Thanks to a 7-week adaptation training programme developed by WHO, through a collaboration between the WHO Country Office in Turkey and the Turkish Ministry of Health, these health workers are now treating patients at the newly established Refugee Health Training Centres. Other stories come from patients, whose lives have been changed through the care, they have received at the Centres. These stories offer a window into the lives, experiences and hopes for the future of Syrian refugees in Turkey.In 2016, the Turkish Government passed a groundbreaking law that allows Syrian health professionals to be employed in health centres. The legislation aimed to both integrate Syrian professionals into the health system and ensure that Syrian refugees can receive health care without encountering language or cultural barriers. As a part of the Refugee Health Training Programme, Syrian health professionals attended a 5-day classroom training and then participated in a 6-week practical training under the supervision of Turkish doctors and nurses in Refugee Health Training Centres. Since, the beginning of the Programme in 2016, more than 1200 Syrian health-care workers have been trained in 7 Refugee Health Training Centres and more than 600 Syrian medical staff have been hired by the Turkish Ministry of Health to provide health services for Syrian refugees. These efforts form part of a broader collaborative framework that aims to ensure universal health coverage for all, including refugees, in Turkey. “Turkey has offered not only a safe escape to Syrian refugees fleeing away from the conflict, but has also given them hope for a new life, in an open-door and open-heart policy,” said Dr Pavel Ursu, WHO Representative to Turkey. “The innovative model of adaptation training developed by the Ministry of Health and WHO has paved a new way for Syrian health professionals to practise their professions, while providing free and culturally sensitive health services to Syrian refugees. Future plans for integration in the Turkish health system and society ensure that this model is sustainable in the long-term.” These doctors, nurses and midwives have had a powerful impact on the lives of their patients – people like 35-year-old Abeer Alhmidi Alkheder.“I was making plans to kill myself,” she said. Then she heard that psychological support was given at Refugee Health Training Centres by fellow Syrians in her native language. “I decided to go there. This was my last hope, but after my first interview, I felt like I was being heard.” Patients are not the only ones who have had important and beneficial experiences through the Refugee Health Training Centres. Ahmed Ahmed, a 26-year-old nurse, who went through the Programme, relates, “After finishing the practical trainings, we decided to arrange a celebration party. The doctors brought us flowers. Our eyes filled with tears at this gesture. We had never spoken of war until this moment. This was the first time we asked each other about our experiences. Many of us had lost our mothers, fathers and siblings.” For many of the health workers, the opportunity to help their fellow Syrians in a new country makes them feel part of a community for the first time since leaving their war-torn homeland.“We all came here with the same sorrow. Helping these people makes me happy,” says Mahmood Idris, a 39-year-old nurse.