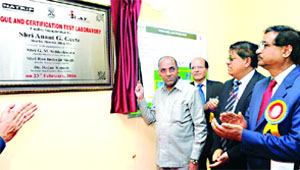 Agencies, New Delhi, Heavy Industries & Public Enterprise Minister Anant Geete on Tuesday inaugurated the new state-of-the-art and modern test facilities installed at the International Centre for Automotive Technology (ICAT) at Manesar in Haryana. The unit has been set up as a part of the National Automotive Testing and R&D Infrastructure Project (NATRiP). The ICAT centre has emerged as a comprehensive technical partner for the automotive industry and currently undertakes major activities including homologation and certification as per Indian regulations; testing as per various Indian and global regulations; and developmental and automotive R&D projects. The augmented facilities are of Noise, Vibration & Harshness Lab (NVH), Passive Safety Lab (PSL), Electromagnetic Compatibility (EMC) Lab and Tyre Test Lab (TTL) and have been completed at ICAT Centre-II at Manesar in Haryana. The centre already has fully functional facilities like Powertrain lab, Fatigue lab, Vehicle Evaluation lab, Component lab, CAD-CAE lab and Infotronics lab. After the NATRiP project was approved by the cabinet committee on economic affairs (CCEA) in July 2005, the International Centre for Automotive Technology (ICAT) was set up in 2006. It is the first of the new world-class centres established under NATRiP. The government has recognised ICAT as one of the accredited ‘Type Approval and Homologation’ agencies in India under Central Motor Vehicle Rules (CMVR) 126. It has also been recognised as a Scientific and Industrial Research Organization (SIRO) from the Department of Scientific and Industrial Research (DSIR), since February 2010, by Bureau of Indian Standards (BIS) for Tyre Testing, Safety Glasses; and by Central Pollution Control Board (CPCB) for Emission and Noise testing of generator sets. The facility is spread across 32,376 square metre at ICAT Centre I and over 1,87,335 square metre at ICAT Centre II, with a capital investment of over Rs 1,100 crore.