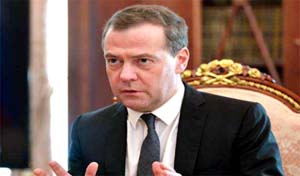 Moscow, Russia on Friday warned that if the US goes ahead with its plans to impose further economic sanctions it would be seen as a "declaration of economic war" and Moscow would respond with all possible economic, political and other means. "I would like not to comment on the talks about future sanctions, but there is one thing I can say: if measures like a ban on banking activities or the use of this or that currency follows, this can be clearly be described as a declaration of an economic war," said Prime Minister Dmitry Medvedev. "And this war will have to be responded -- by economic, political and, if necessary, other means. And our American partners should realize this," TASS reported quoting Medvedev as saying during a visit to the Kamchatka region. . The Trump administration on Wednesday said it plans to punish Russia with sanctions for poisoning Sergei Skripal, a former Russian spy who became a double agent for the UK, and his daughter Yulia Skripal with a chemical weapon earlier this year. In a statement, spokeswoman Heather Nauert said the sanctions will go into effect around August 22. The Kremlin has strongly denied any involvement in the Skripal attack Speaking about sanctions currently in place and those recently announced, Medvedev said that despite the declared political reasons behind them, those measures are intended mostly "to limit our economic power." "In the past hundred of years, our country existed in the conditions of the constant pressure of sanctions. Why is this being done? In order to eliminate Russia from the list of powerful rivals on the international arena," he said.