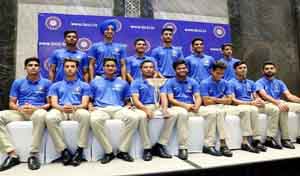 Mumbai,[/caption] After thrashing Australia in the finals of the U-19 World Cup by 8 wickets, recently in New Zealand, India received a rousing welcome at the Chhatrapati Shivaji International Airport here on Monday. The team led by skipper Prithvi Shaw and coach Rahul Dravid were received warmly by fans and senior members of the Mumbai Cricket Association (MCA) here. India performed brilliantly throughout the tournament and remained unbeatable, and won for the fourth time to lift the title in New Zealand.