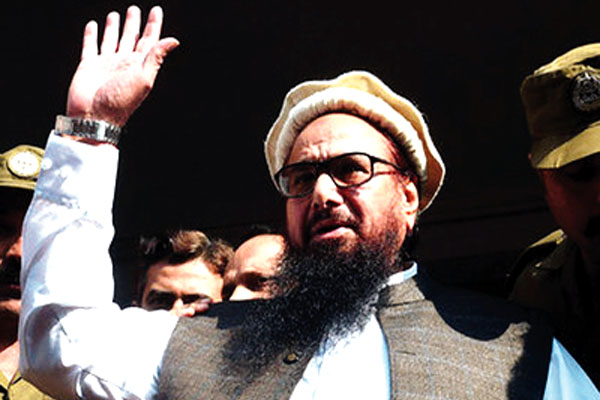 Agencies, New Delhi The National Investigation Agency (NIA) filed a charge sheet against 12 people, including Lashkar-e-Taiba Chief Hafeez Saeed and Hizbul Mujahideen head Syed Salahuddin, in a case related to alleged funding of terror activities in the Kashmir Valley, here on Thursday. The charge sheet was filed in NIA special court and the probe agency has sought permission to continue its probe. NIA had arrested Altaf Ahmad Shah, son-in-law of Syed Ali Shah Geelani, others in connection with the case. The12,794 page chargesheet has been filed under various sections of the Indian Penal Code and Unlawful Activities (Prevention) Act, 1967. The National Investigation Agency registered this case on May 30, 2017. “During the course of investigation, the NIA teams conducted searches at over 60 locations spread across the States of Jammu & Kashmir, Haryana and Delhi and seized over 950 incriminating documents and over 600 electronic devices. During the investigation, over 300 witnesses were examined”, said an official release. The scrutiny and analysis of the documents and digital devices established that the accused persons the Hurriyat leaders, the terrorists and the stone-pelters were carrying out terrorist attacks and orchestrating violence, stone-pelting and other subversive and secessionist activities in Jammu & Kashmir as a part of their well planned criminal conspiracy hatched with the active support, connivance and funding from terrorist organisations based in Pakistan and its agencies to achieve their objective of secession of the State of Jammu & Kashmir by waging war against the Government of India. Under the overall guidance and instructions from Hafiz Syed, along with his associates formed strategies and action-plans to launch violent protests and communicate the same to the masses in the form of protest calendars released through newspapers, social media and religious leaders, creating an atmosphere of terror and fear in the State of Jammu & Kashmir. The investigation based on scientific and oral evidences has conclusively established that for carrying out all these terrorist and subversive activities, the gang of the accused persons was receiving funds from Pakistani agencies through hawala conduits such as Zahoor Ahmad Shah Watali and others and are also raising funds by generating illegal profits from Line of Control(LoC) barter trade by doing under-invoicing and cash-dealings.