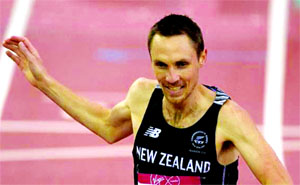 Agencies, Melbourne Dual Olympic medallist Nick Willis has withdrawn from the Gold Coast Commonwealth Games after the New Zealand middle distance runner failed to recover from a leg injury. Willis, who won 1,500 metres silver at the 2008 Beijing Olympic Games and bronze in the same event at Rio in 2016, was diagnosed with a “stress reaction” in his fibula last month and has yet to resume training. “My leg hasn’t healed fast enough for me to be able to resume running, so I’m having to withdraw from the Comm Games,” the 34-year-old tweeted on Monday. “Hoping all this gym work will pay off for the next two years.”Willis won 1,500m gold at the 2006 Commonwealth Games in Melbourne and claimed bronze in the event at Delhi in 2010 and Glasgow four years ago.The Gold Coast Games start on April 4.