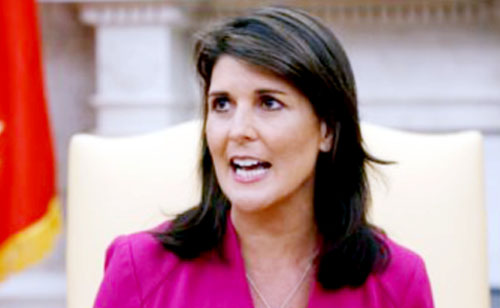 Washington, President Donald Trump announced that Nikki Haley US ambassador to the United Nations will be leaving her post at the end of the year, as she has resigned. During a meeting in the Oval Office on Tuesday, Trump said that Haley had told him in advance that she wanted to take a break after having served for two years helping advance the administration's foreign policy agenda, a report in ABC news said. According to one State Department source, Haley also reportedly told her staff that she intended to resign. “She’s done a fantastic job and we’ve done a fantastic job together,” Trump said during the meeting with the outgoing ambassador on Tuesday. “We’re all happy for you in one way, but we hate to lose you.” Harley threw some light on her work and experiences ranging from talks with North Korea about denuclearization, improving dialogue with Russia, moving the U.S. embassy to Jerusalem, and taking a harder line with Iran. She also added that she relished going into meetings with foreign leaders with "body armor every day to defend America." "It has been an honor of a lifetime," ABC news quoted Haley. "Now the United States is respected. Countries might not like what we do, but they respect what we do. Now if we say we're going to do something, we follow through...whether it's the chemical weapons in Syria, whether it's with NATO and other countries have to pay their share, whether it's the trade deals, which has been amazing. They get that the president means business and we follow through with that", Haley's departure brings her career with the Trump administration on the world stage full circle. In the Republican response to the 2016 State of the Union address, she urged members of her party to resist following the “angriest voices,” which was seen as a subtle jab at Trump, even though she didn’t refer to him by name. In December, she famously told countries critical of America's decision to move the U.S. embassy to Jerusalem that “the US will be taking names” of countries who vote in favor of a U.N. resolution criticising the move. By the time of her last high-profile appearance at the United Nations General Assembly in September, when she appeared alongside President Trump, she had earned a reputation among world leaders as a someone who would promote American foreign policy but also serve as a moderating voice in the room. Haley has been the UN ambassador since January 2017. Prior to that, she served as the Governor of South Carolina – a role she became famous for when she called for the Confederate battle flag to be removed from the State House in the wake of the deadly shooting in a historic African American church in Charleston.