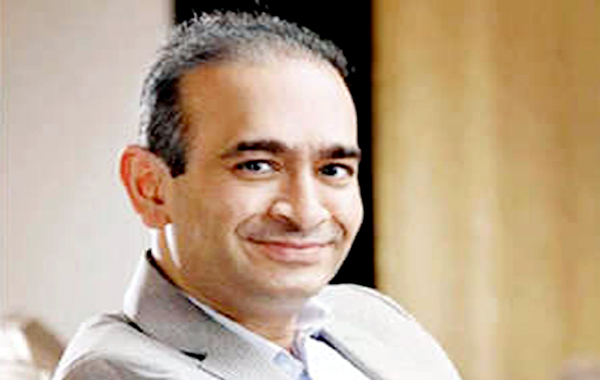 New Delhi, British authorities on Monday confirmed the presence of fugitive diamond merchant Nirav Modi in United Kingdom, top Government sources said. Sources said that the visiting Britain counter terrorism Minister Baroness Williams, who is in national capital for delegation level talks on counter terrorism , confirmed the reports about the presence of absconder Nirav Modi in the United Kingdom and had assured the Indian Government for all support to extradite the fugitives hiding in UK including Nirav Modi. The UK Minister also promised the Minister of State for Home Affairs Kiren Rijiju for UK’s support to extradite industrialist Vijay Mallya to India. Mallya, who has been staying in the UK for over a year now, has been accused of defaulting on loans worth thousands of crores. “Had a fruitful meeting (with the UK minister) and I have put across the Government of India’s demand for cooperation from UK authorities on extradition of whoever is wanted in India. The minister has assured of cooperation, whether it is Nirav Modi or Vijay Mallya,” Rijiju told the media after the meeting with Williams. MHA officials also convinced the British authorities about their apprehensions of the conditions of Indian jails and assured that India abides by international laws. In response to the UK Minister’s request for facilitating repatriation of illegal migrants, Rijiju said that while the issue of time frames is important, Government would like to reassure itself about the completion of verification before repatriation process begins. After the meeting, Rijiju posted on Twitter: “I had a very useful meeting with the UK Minister Baroness Williams. We discussed about India-UK joint efforts to deal with Terrorism and Extremism. We also agreed to cooperate in matters of extradition and sharing of information”, Mr Rijiju tweeted. Diamontaire Nirav Modi and his uncle Mehul Choksi are accused of siphoning around Rs 13 thousand crores of Punjab National Bank through fraudulent means. The Central Bureau of Investigation (CBI) and Enforcement Directorate(ED) have registered cases against them in money laundering act. Both fugitives are avoiding the investigating agencies in India. Income Tax Department, ED and CBI had already sent Letter Rogatories (LRs) in the cases lodged against Nirav Modi to the UK Central Authority (UKCA) on March 19, April 14 and April 15 respectively. The UKCA has forwarded these LRs to the Serious Fraud Office (SFO) for execution and conveyed that action would be taken on implementation of the ED LR. The ED and the SFO have entered discussions on the way forward.