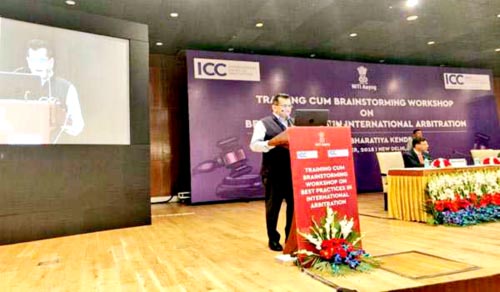 New Delhi, The NITI Aayog and ICC International Court of Arbitration organised the inaugural training-cum-brainstorming workshop on best practices in International Arbitration here on Wednesday. The workshop is part of on-going efforts to institutionalise and streamline dispute resolution to make India a hub for doing business. Moving towards a New India in 2022, ensuring legal reform is a key and critical priority. Complementing ‘Make in India’ vision with ‘Resolve in India’, strong alternate dispute resolution mechanisms are important levers in encouraging the Ease of Doing Business and Ease of Living in India. The workshop was inaugurated by the chief guest, Justice Arjan Kumar Sikri, Judge, Supreme Court, and was presided over by MoS for Law and Justice P P Chaudhary. NITI Aayog CEO Amitabh Kant was also present during the workshop. Following the international conference on arbitration held in 2016 and the National Law Day conference in 2017, the present workshop continues to encourage and highlight the need for understanding and implementing arbitration across the spectrum of commercial contracts, with over 200 senior officers from Central and State Governments, and Public Sector Undertakings participating. With government’s thrust on ‘Make in India’, it is important for investors, both domestic and international, to have faith in the dispute resolution mechanism in India. In this regard, a well drafted dispute resolution mechanism and a comprehensive understanding of best practices and procedures would complement the initiative and give the much-needed impetus to effective and timely enforcement of contracts. The workshop covered basic concepts of international arbitration and included best practices on drafting of arbitration agreements, factors to consider when deciding on the seat, venue, institution and governing law. It also covered topics related to the selection of arbitrators; enforcement of arbitral awards and the role of courts before, during and after the arbitration. The topics of the information sharing session were delivered by world class faculty and practitioners from the United Kingdom, Singapore, Paris and India. The training-cum-brainstorming workshop is an important part of the ongoing endeavour by NITI Aayog in a co-operative setting to skill and prepare senior officers for global best practices and give them the opportunity to gain expertise in enhancing the ability to understand, review, revise and draft Arbitration related aspects of contracts. The Aayog first highlighted the importance of Arbitration by organising a two-day conference on international arbitration in 2016 with over 1400 participants, according to an official statement here.