No breakthrough in talks with 'bellwether' Paswans: Jaitley may pursue parleys 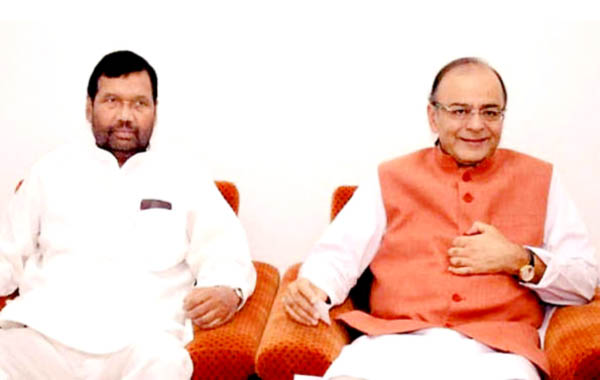 New Delhi, The BJP leadership has tasked Finance Minister Arun Jaitley to pursue further talks with the aggrieved LJP leaders Ram Vilas Paswan and his lawmaker son Chirag and JD(U) chief and Bihar Chief Minister Nitish Kumar to end the deadlock in seat adjustment talks in NDA for 40 Lok Sabha seats in Bihar. The development comes after two-hour long meeting between father-don duo and BJP chief Amit Shah on Thursday evening. LJP chief and Union Food Minister Mr Paswan is known as 'bellwether' in coalition politics and has operated smartly to ensure cabinet berth for himself under all Prime Ministers since 1996.He seems to weigh options on the possibility of a NDA defeat in the 2019 elections. Bihar Chief Minister and JD(U) chief Nitish Kumar will arrive in the national capital on Friday and is expected to hold seat-sharing talks with BJP and LJP. The BJP and JD(U) have earlier stated that they will contest an equal number of seats in Bihar in 2019 Lok Sabha elections. Mr Jaitley as Bihar in-charge of the BJP had enjoyed good working relations with Nitish Kumar. Apparently the broad agreement between JD(U) and BJP was that both the partners will contest 17 seats each and leave four for Mr Paswan's outfit and two for RLSP leader Upendra Kushwaha. Mr Paswan's young brother and a minister in Bihar government Pashupati Kumar Paras has said LJP was not even consulted before finalisation of talks between JD(U) and BJP. But with Kushwaha's exit, LJP now wants seven seats, a source said. Union Food Minister Mr Paswan, who has maintained that there was nothing to worry about in the NDA, is reportedly toying the idea of entering Rajya Sabha and is seeking BJP's help on the same. Sources said, LJP was promised one Rajya Sabha seat by the BJP and apparently things have been derailed after Nitish Kumar-led JD(U) came back to the NDA fold. After Upendra Kushwaha quit NDA, the BJP leaders told LJP that instead of four Lok Sabha seats in 2019, the party could contest in six seats. But LJP sources said, there was "still a gap" about the offer of Rajya Sabha seat. JD(U) leadership has favoured 'unity' among all stake holders in the NDA. Mr Nitish Kumar's trusted aide Prashant Kishor, JD-U vice president, has said "All key constituents of the coalition must work together". "Joint efforts and collective strength of existing and potential NDA allies is key to the success in upcoming 2019 elections," he said. In the deliberations between BJP top leaders on Thursday, senior Paswan allowed his son Chirag to do most of the talking. At the first meeting with Amit Shah's emissary Bhupender Yadav, also BJP general secretary in charge of Bihar, Chirag Paswan reportedly sought seven Lok Sabha seats. There was also a latent pressure for the Rajya Sabha berth for his father. Junior Paswan also urged the BJP leadership to ensure that there should be regular NDA meetings and joint poll strategies worked out especially for Bihar. According to a LJP source, Paswans are perturbed that the party could not expand its base beyond Bihar apparently due to saffron party's 'non cooperation'. However, as the Congress, RLSP, RJD and HAM announced their Mahagathbandhan on Thursday, he too is running out of options. Junior Paswan - Chirag, who is chairman of LJP Parliamentary party - has on Thursday flayed NDA regime and in a letter to Finance Minister Arun Jaitley questioned what were the 'advantages of demonetisation' in 2016.He also hailed Congress president Rahul Gandhi's for leadership in ensuring Congress victory in three heartland states. The move is seen as a pressure tactics on Mr Jaitley, who shares a good rapport with JD(U) leader and Bihar Chief Minister Nitish Kumar. A section of BJP seems to insist that the leadership should not give in to the pressure tactics of LJP chief especially in the context of his past track record.