No dispute between MP and Gujarat over Narmada Water 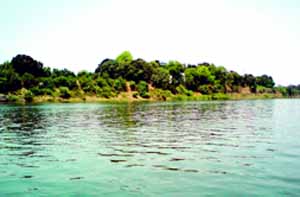 Chronicle Reporter, Bhopal There is no dispute between Gujarat and Madhya Pradesh over the quantity of water released from the Indira Sagar Reservoir, which was affected due to the insufficient monsoon this year. Keeping in view the requirement of electricity of the state, drinking, irrigation, household chores and environmental purposes, about 14 M.C.M. water is being released daily from the reservoir at present. The permission to use dead storage water from the Sardar Sarovar Reservoir has already been given to Gujarat to satisfy its requirements in a meeting of Narmada Control Authority held at New Delhi on February 9. In this way there is no dissatisfaction in both the states against use of Narmada water as per their requirements. Vice Chairman Narmada Valley Development Authority Rajnish Vaish informed that about 70 percent of the water, out of the total water being released daily from the Indira Sagar is being utilized inside the border of Madhya Pradesh for drinking, irrigation and household purposes. The flow of Narmada underneath the Omkareshwar reservoir environmental needs are also being maintained with this water. It may be mentioned that the rear part of Sardar Sarovar covers Maheshwar inside the boundary of Madhya Pradesh. Narmada water being released by Madhya Pradesh is being utilized for drinking and household purposes of several cities, towns and villages beside Omkareshwar and Maheshwar. Keeping in account the water availability in Indira Sagar and the requirement of Madhya Pradesh, the water is being drawn in a controlled manner. Water being released currently is not part of Gujarat’s share.