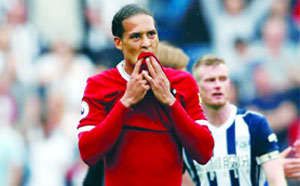 Agencies,Liverpool Liverpool’s defensive errors in last weekend’s Premier League draw with West Bromwich Albion was a one-off occurrence and is not really a concern, defender Virgil van Dijk has said ahead of Tuesday’s Champions League semi-final first leg against Roma. Liverpool had managed six clean sheets in their last 10 league matches before their trip to the Hawthorns but squandered a 2-0 lead as West Brom scored two late goals to snatch a draw. Despite the defensive lapses, Van Dijk dismissed any worries about the Roma tie, saying Liverpool would regain their shape and composure against the Italian side. “I don’t worry at all,” Van Dijk told British media. “There is no need to stress. There is no reason to panic. “They are fighting for their lives so in the end they are very direct, balls into the channel, work hard, trying to get fouls and free-kicks - and we didn’t deal with that how we should... “We need to keep doing what we did in the last games, recover and focus on Roma now. We need to switch on again and do the same things that we always did. I think we should be fine. It is a massive opportunity to get a good result on Tuesday.” Juergen Klopp’s team have previously been criticised for inconsistent defending but the arrival of van Dijk in January seemed to solidify Liverpool’s defence. The Merseyside club are fighting to reach their first Champions League final since 2007 and host Roma at Anfield.