No one will interfere with T Series' rights, says court 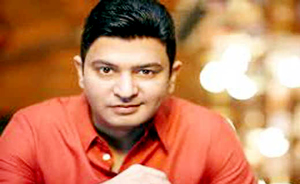 New Delhi, After the Delhi High Court recently cleared T-Series to complete 'Batti Gul Meter Chalu' has received yet another claim, this time by noted film producer Vashu Bhagnani. Prerna Arora, who earlier was the co-producer of the film, had shared some share of rights in this film as well 'Fanney Khan' claimed by Vashu Bhagnani. The shooting of both these films was recently stalled due to lack of funds, owing to which KriArj wanted to exit the projects. However, Bhushan Kumar's T-Series took over the projects and is now co-producing these films along with other production companies such as Krti Pictures and Rakeysh Om Prakash Mehra Productions. It is learnt that Vashu Bhagnani and his company Pooja Films has recently sent a legal notice to T-Series and KriArj claiming to have co-producer rights in both these films and is also planning to initiate legal action in this regard. Clearing the air on the same, T-Series has mentioned that they were granted the rights for these films under a co-production agreement with KriArj, long before KriArj got into any agreement with Vashu Bhagnani. T-Series also claims to have no knowledge of such a deal and has categorically disputed its validity. T-Series maintains its claims of having valid and superior rights in these films and is prepared to take these claims on in the courts. Maintaining their right over the film, Ankit Relan from the legal team of T-Series commented, "The number of people claiming parallel rights in these films is quite astonishing. We had filed a suit last month before the Delhi High Court against KriArj, Gothic Entertainment, Ease My Trip and other such entities where, after considering all the materials on record, the Court had issued an order in Tseries' favour observing that KriArj did not have the right to grant any third party rights or create any lien over the film without taking the written consent of T-Series who was jointly producing the film Batti Gul Meter Chalu with KriArj.' 'T Series had never given any written consent to any such agreements or the grant of liens by KriArj and accordingly its rights were upheld by the court which restrained all these parties from interfering in the exploitation of rights,including distribution rights therein by Tseries and held that only Tseries had the right to do so as per its co-production agreement with KriArj. This Agreement, I want to clarify, was executed much prior to the Agreement under which Pooja films and Vashu ji are claiming rights under. Given the protection already offered by the court against other similarly placed claimants, I don't see how Vashu ji's claims will hold up in court,' Ankit said.