No Trust Debate: TDP lashes out at PM for denying Spl status to Andhra 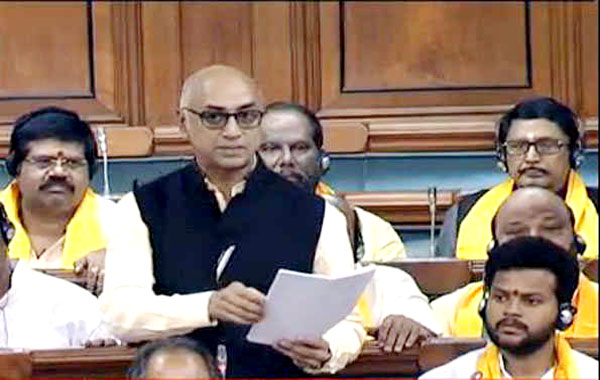 New Delhi, The TDP on Friday lashed out at the Modi government for not granting Special Category status to the bifurcated state of Andhra Pradesh and said the No Trust Motion has been moved by his party to protest the "lack of trust, lack of fairness and lack of unbiased approach towards the state". Initiating the debate on the motion moved by his party colleague, K Srinivas, Guntur MP Jayadev Galla said: "it will not be prudent to say that the issues of Andhra Pradesh are not national issues". "They are certainly national issues and emotional issues for the people of Andhra and today is the litmus test for Parliament," he said adding "Madam, it is not a war between the TDP and the BJP". He accused the NDA government of misleading the people of Andhra Pradesh on the recommendations of the 14th Finance Commission. The TDP MP lamented that the BJP leadership in a meeting with party leaders and MLAs and MLCs had "declared to wage a war" against TDP. He maintained that if BJP continues to deceive the people of Andhra Pradesh, the saffron party will also be "decimated" in the manner the Congress was. Expressing his anguish over the functioning of the Modi government for not granting Special Category status to Andhra Pradesh and also on the issue of corruption and questioned the manner BJP has been allegedly trying to establish political nexus with YSR Congress Party. Mr Galla said the incumbent Prime Minister Narendra Modi should honour the assurance given by his predecessor Dr Manmohan Singh in Parliament on Special Category status to Andhra. "Mr Prime Minister, do you have any respect for the assurance given by your predecessor?," Mr Galla asked.