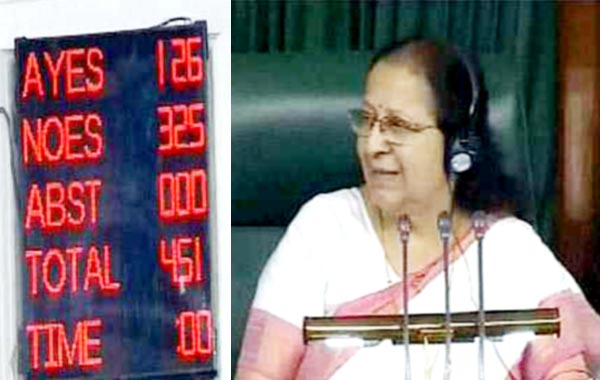 New Delhi, The Lok Sabha on Friday rejected the no confidence motion moved by the TDP against the NDA Government, with the ruling dispensation getting support of 325 members against 126 MPs who voted in favour of the motion. At the end of an over 12 hour long marathon debate marred by unprecedented dramatic interludes and strong verbal duel between the BJP and the Congress members , Speaker Sumitra Mahajan announced that 126 members voted in favour of the no trust motion while 325 member voted against it. 'The Motion is negated,'she said. This was the first No Trust Motion against the Modi Government which came into power in 2014. However, the Government suffered a major embarrassment as its staunch ally and a part of the Government, the Shiv Sena stayed away from the debate and voting on the Motion. The BJD members staged a walkout early in the morning before the commencement of the debate saying that the discussion on the no trust motion would not be fruitful for the state of Odisha. The last no trust motion against the Central government was moved in 2003 when the NDA regime headed by Prime Minister Atal Bihari Vajpayee had defeated the opposition move.