No untoward incident during farmer agitation in state so far 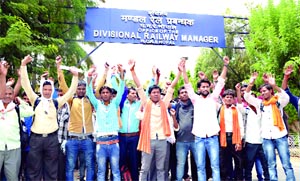 Farmers hold demo at DRM office; programme today in Mandsaur to observe first anniv of police firing Chronicle Reporter, Bhopal, The 10-day farmers’ ‘Gaon Bandh’ agitation in support of their demand for remunerative prices for crops remained peaceful in Madhya Pradesh in its fourth day. Even though police exercised alertness across the state, Malwa and Nimar regions remained high on their radar. No untoward incident was reported from Indore, Mandsaur, Neemuch, Ratlam, Khargone and nearby districts. Chief Minister Shivraj Singh Chouhan, Home Minister Bhupendra Singh and the Police Headquarters are maintaining a tight vigil. Additional force have been deployed in about one-and-half dozen districts as a precautionary measure. Police are keeping an eye on those circulating rumours on social media. The principal-opposition Congress has organised a ceremony in Mandsaur’s Pipaliyamandi on June 6 for paying tributes to six farmers who were killed firing there last year. Congress President Rahul Gandhi is scheduled to attend the programme. The administration is maintaining alertness in view of the ceremony. In Betul, police initiated preventive action Congress leader and farmer Balram Barange for trying instigate other peasants for not going to the Multai ‘mandi’ and sell vegetables. Sub-Divisional Magistrate Rajesh Shah has ordered him to present before a court here today and submit a bond of Rs 30,000. Meanwhile, the SDM has issued a show-cause notice to gram panchayat official J Dodke for uploading a post related to the agitation on social media. Govt preventing farmers from joining rally at Pipliya Mandi: Cong Meanwhile the State Congress has claimed that the Shivraj Singh Chouhan government was pulling out all stops to prevent farmers from joining the rally at Pipliya Mandi in Mandsaur to observe first anniversary of police firing. Congress leaders said that the party’s vehicles are being seized by police and administration and being kept at the police stations. PCC chief Kamal Nath appealed the farmers and people to join June 6 rally of 130 farmers’ associations ‘fearlessly’ and in large numbers. AICC president Rahul Gandhi is scheduled to address the farmers’ gathering on Wednesday. He will reach the venue at 10:30 am, a state Congress release said. “There is no need to be afraid of government and its administration as we will hold a peaceful rally,” Kamal Nath said. “But the government is following the tactics of the British Raj. They have forgotten that people now live in a free and independent India. We have the right to demonstrate peacefully and no one can take away this entitlement from us. In this peaceful function, the government is conspiring to spread violence. And we will unitedly thwart that attempt. That is why people should come fearlessly and join the rally in large numbers.” Leader of Opposition Ajay Singh said that the entire state has been put under Section 144 and even in the district of Umaria which is 760 kms away from Pipliya Mandi, the police is not permitting even a panchayat programme. In Sidhi, Satna, Umaria and Singrauli which is right on the other side of the state, farmers cannot congregate for even a panchayat meeting.Police have imposed Section 144 all over the state before the Mandsaur rally,” Ajay Singh said. Singh alleged that roads are being blocked and barricaded by the police so that it is difficult for farmers to reach the venue. Congress had earlier alleged that farmers have been forced to sign ‘peace maintenance’ bonds by the administration. “This kind of behaviour by the BJP government will prove counter-productive. If you suppress dissent, it is bound to erupt into a bigger movement,” Ajay Singh said. State Congress media committee chairman Manak Agarwal said, “The BJP government is trying all within its means to make Rahul Gandhi’s rally unsuccessful. But no matter what it does, the rally will be an unprecedented success story. The Congress’ vehicles are being seized. Mandsaur has been barricaded from all sides to prevent people from reaching the venue. Farmers throughout the state are being stopped on the highways and searched. What is the message this government wants to send to the people?”