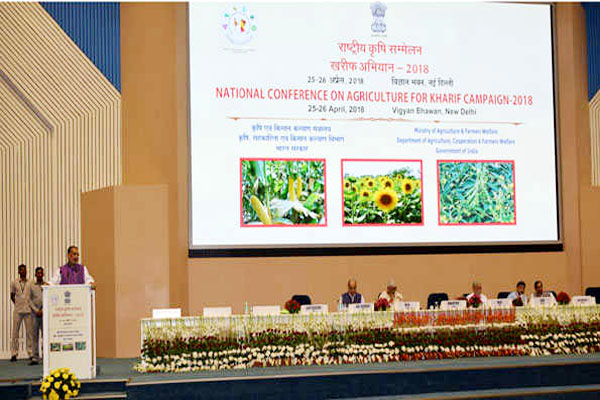 New Delhi, Buoyed by the forecast of a 'normal monsoon', the Centre on Wednesday announced a production target of 283.7 million tonnes for 2018-19 with 140.2 million tonnes for kharif and 142.5 million tonnes for rabi crops. 'The forecast for normal monsoon is a good signal for production of kharif crop,’’Union Agriculture and Animal Welfare Minister Radha Mohan Singh said inaugurating the National Campaign for Kharif Campaign, 2018 here. He also reiterated government’s resolve to declare 50 per cent hike in the minimum support price for the coming kharif crops. Declaring the foodgrains targets at the conference, Union Agriculture Commissioner S.K. Malhotra said the target for wheat output next year is set at 100 million tonnes,while rice production is fixed at 113 million tonnes. As against the target announced, the estimated production of foodgrains expected for 2017-18 is 277.49 million tonnes as per the second advance estimates declared in February. The target for pulses production is fixed at 24 million tonnes, while for oilseeds it is 36 million tonnes. Coarse cereals output target is fixed at 46.7 million tonnes against 45.42 million tonnes likely to be achieved this year. Sugarcane output is set at 355 million tonnes compared to 353.23 million tonnes likely to be achieved this year. As against estimated cotton production of 33.92 million bales of cotton, the target for next year is 35.5 million bales with each bale of 170 kg. The Agriculture Commissioner advised states to prepare for Kharif sowing with timely arrangements of inputs such as seeds, fertilisers and positioning of inputs. He said although there is a forecast for normal monsoon, the government was prepared with a contingency plan for all districts. States were also advised to effectively implement the flagship programmes of the central government with the involvement of State Agriculture Universities and Krishi Vigyan Kendras. The two-day conference is being attended by state agriculture officials and commissioners. It will review rabi crops and discuss prospects for kharif crops that will be sown soon.