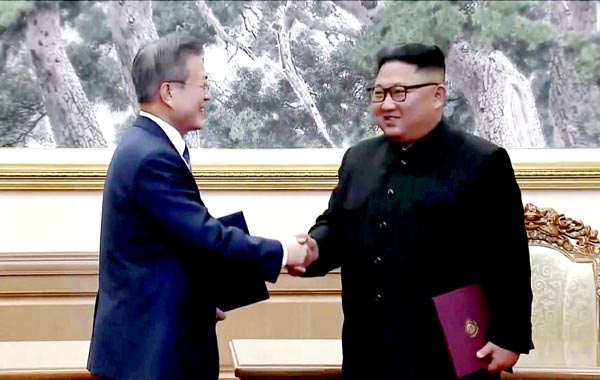 Pyongyang, North Korean leader Kim Jong Un and South Korean President Moon Jae-in signed an agreement on denuclearisation, reducing military tensions and defusing crisis on the peninsula in Pyongyang on Wednesday. The two giants also agreed to take further steps toward the process, a report published in The Korea Herald, a South Korean daily, said. During a news conference after the signing ceremony, the North Korean leader said, "We agreed to make the Korean Peninsula [an area] with no nuclear arms. The agreement reflects our wish for the reunification for the two Koreas." Mr Kim also pledged to to visit Seoul, first visit by a North Korean leader to the South since the Korean War. The North Korean leader also stated that the regime is willing to demolish the country's largest nuclear facility in Yongbyon, if the US takes corresponding measures."The seeds to a peaceful future have been planted. The complete denuclearisation of the Korean peninsula will happen in the near future, " said Mr Moon. "I hope the talks between North Korea and the US will be revived as soon as possible," said Mr Moon.The leaders of the two militaries, South Korean defence minister Song Young-moo and Korth Korea's minister for the People's Armed Forces No Kwang-chol also signed a declaration.