Nothing is scripted in Big Boss: Arshi 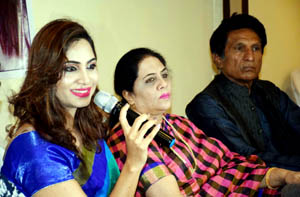 Chronicle Reporter, Bhopal Big Boss fame Arshi Khan made a visit to the city on Monday upon the conclusion of Season 11 of the Big Boss. Talking to reporters, she told media persons a number of things about the house of Big Boss House. She said nothing is scripted in Big Boss House. Quarrels, friendships, gossips etc take place on the spot. Arshi became famous by disclosing about 18 marriages of her grandfather in the Big Boss. She said she sticks to what she disclosed. She said it is true and she is proud of her grandfather. She said she is not upset as she could not become a winner of Big Boss, but she won fame in the Big Boss house and outside by participating in it. Therefore she considers her a winner of Big Boss. About her future plans she said she is doing one more reality show.