Notices on Privilege motion under her consideration, says Speaker 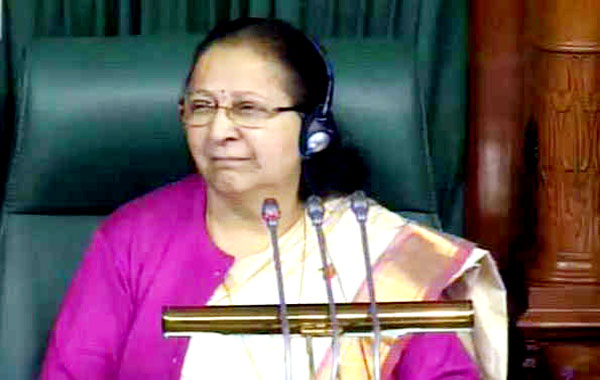 New Delhi, Lok Sabha Speaker Sumitra Mahajan said on Wednesday that all the notices of privilege motions from Congress members against Prime Minister Narendra Modi and Defence Minister Nirmala Sitharaman have been received and they are under her consideration. Immediately after the Question Hour ended, Opposition members led by Mallikarjun Kharge (Congress) were up on their feet asking the Speaker on the fate of their notices. Ms Mahajan said five separate notices against the Prime Minister and the Defence Minister are under her consideration. From the ruling side, Anurag Thakur, BJP's chief whip also wanted to know the Chair's decision on the notices of privilege motion given by him and party colleagues Nishikant Dubey and Pralhad Joshi against Congress president Rahul Gandhi. The Speaker allowed Jyotiraditya Scindia of Congress and Mr Thakur to make brief remarks and subsequently Zero Hour was taken up. The Congress on Tuesday gave separate notices of breach of privilege motion against the Prime Minister and Defence Minister, for 'misleading' the House on Rafale deal. Among others, Congress Leader Mallikarjun Kharge is one of the petitioners.