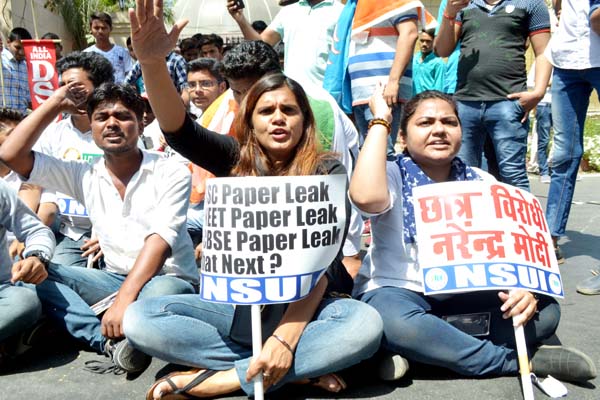 New Delhi, The National Students Union of India (NSUI) on Friday asked HRD Minister Prakash Javadekar to sack the Central Board of Secondary Education (CBSE) chairman Anita Karwal to ensure a fair enquiry in the alleged leakage of Class 10 Math and Class 12 Economics papers. In a memorandum submitted to Mr Javadekar by a delegation of NSUI leaders, led by its national president Fairoz Khan, the students wing of the Congress also demanded early announcement of re-examination date of the both the papers . “ Enquiry on the CBSE paper leak by retired Judges. Those accountable should be held responsible. Ensure a full leak proof mechanism to restore faith in CBSE,” the memorandum by the NSUI said. The NSUI also demanded alternative of aggregate marks to the students who do not want to give the re-examination. Earlier, the members of the NSUI also held protest in the national capital in this regard. They tried to march towards Mr Javadekar's residence but were stopped by the police as section 144 was imposed in the area. On Thursday, Delhi Police said that it had questioned 25 people, including 18 students, in connection with the alleged leakage. It may be noted that the CBSE on Wednesday said it had taken cognizance of certain happenings in the conduct of certain examinations as reported. Also, with a view to uphold the sanctity of the Board examinations and in the interest of the fairness to the students, the Board has decided to re-conduct the examinations.