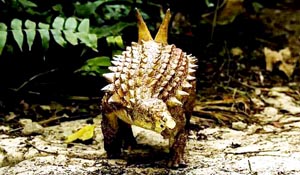 Mexico City, A new species of dinosaur has been discovered in Mexico by palaeontologists at the acclaimed Desert Museum, according to an Euronews report. The creature lived 85 million years ago, making it the oldest dinosaur to have inhabited the region.The Acantholipan gonzalezi was found in the Ocampo region of Coahuila and is native to the country's northern desert region.It seems to be a juvenile because of its measurements.It's 3.5 metres long and weighs more than half a ton. A replica of the prehistoric animal is on display at the museum which also features the most important collection of dinosaur bones, including the one we all know, the Tyrannosaurus Rex.