“One road changes life of village: Opens door to development” 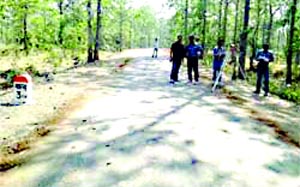 Chronicle Reporter, Bhopal Saras is a village 50 kms away from Sehore district headquarter dominated by Korku tribals. This village is adjacent to Loha Pathar. After independence, this is for the first time that an asphalted road has been laid here under Pradhan Mantri Gram Sadak Yojana. The road is 8.00 km long and has been built at a cost of Rs 274.77 lakh. With the construction of this road 794 population of Saras village and 514 populace of Magarpat village has been benefitted. Earlier this village had no road hence it was unapproachable and the path was full of obstructions. Despite being an adivasi dominated village, no development scheme of the government was able to reach the village in reality. In the rainy season, the village would lose contact with the main road. Villagers would remain deprived of health facilities. Pradhan Gram Sadak Yojana came as a boon for the village under which Saras village was linked to Bhopal Kolar main road. Culverts were built over the drains on the way.But after construction of the road door to new possibilities opened up in addition to traditional trades for the people of Saras. Shankar Singh Korku, Ramlal, Jaisingh belonging to milk production business are of the opinion that this road has made milk trade beneficial. Now they are able to visit any city to sell their milk in any weather. Earlier they would have no business in rainy season but now the new road has made transport easier.Now the people from administration have started visiting the village. Implementation of government schemes and their information has become easier. Earlier it would take several months to get damaged hand pumps repaired or power cuts restored but now complaints reach the officers promptly and action is taken immediately. Teachers are able to reach the village on time and mid day meals are also being implemented without difficulty. In case of serious illness or delivery, the patient can be rushed to district hospital Sehore or Bhopal by road thus saving lives on time. The new road has enabled auto rickshaws and other vehicles to come to the village thus making transport easier. Farmers are able to take their crops to the mandi easily.